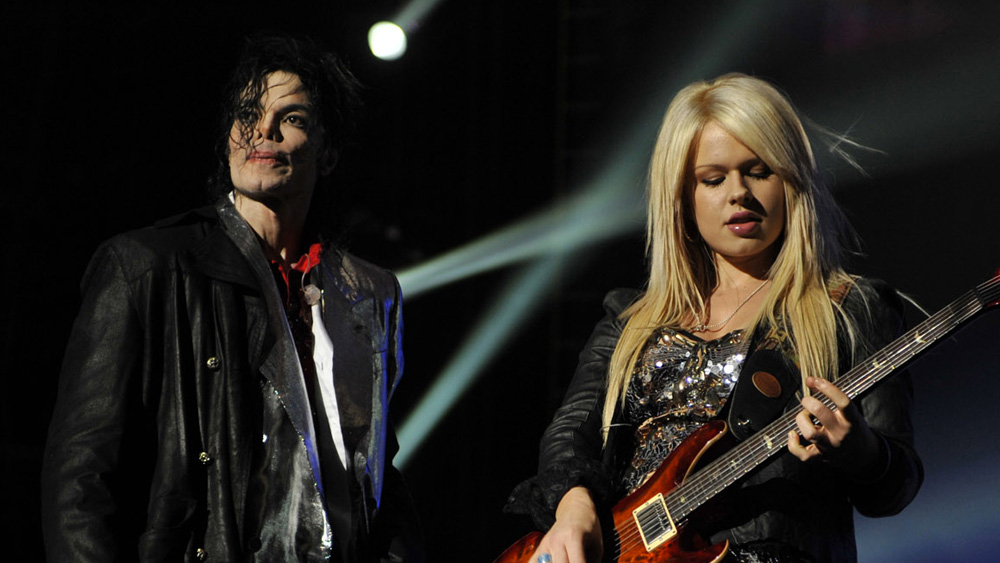 During the interview Beckner asks Orianthi about the MJ guitar that had been made especially for the ‘This Is It’ shows.

“That was actually designed with Michael Jackson and his clothing designer,” she explains. “It was my guitar originally. It was just a blue Custom 24. We literally just created that guitar over the span of a month or so for the tour. That guitar was actually bought from me by a big Michael Jackson fan in China who wanted to display it. It was in a storage unit, in a vault, it was pretty much kept in the dark because I didn’t want to play it and lose crystals. I’d rather have it displayed somewhere for people to see than locked up in the dark somewhere.”

Orianthi’s then asked what Michael had planned for the ‘This Is It’ shows and if there were any surprises. “There were a lot of surprises,” she says. “Obviously, we had to sign non-disclosure agreements and I don’t know if they still stand or if I can talk about everything freely these days, but there were a lot of things that were going to be pretty epic. It was going to be one of the greatest shows on Earth! That’s for sure.” She then goes on to explain how she became chosen to work with Michael. “It was actually through MySpace. I was in the studio working with Diane Warren and I was putting some vocals down and I got an email through Myspace from Michael Bearden saying Michael saw me on the Grammys with Carrie Underwood and my YouTube videos and that I was exactly what they were looking for. He said in the email that he was going to call me that night with Michael. So they called me that evening and asked me if I’d learn ‘Dirty Diana’ and ‘Beat It’ and play it for them the next day because they were going to be starting something. So I did it and I didn’t know what to expect. They hired us all on the spot and we started working. It was pretty surreal.”

When asked what she learned from Michael, Orianthi explained; “I learned so much. I can’t even really, there was so much I learned from him. It was truly an honour and I’m so grateful to have had that time with him because he pushed everyone to be better. He would tell us to step into our light and reach higher. He would tell me to reach my highest note, keep pushing, and be the best performer you can be. He was so precise about everything, from the dancing to the sounds. He had this photographic memory for every part of every one of his songs. It was pretty incredible working with him like that.”