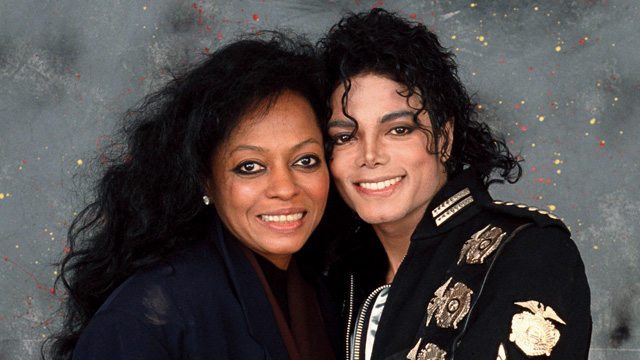 Diana Ross turned 70 on Wednesday. In celebration of her birthday, Yahoo Music have looked back on the history of the Supreme queen and one of her favourite people — Michael Jackson.

Ross introduced Michael and the Jackson 5 to the world in 1969. Their chemistry and love for each other was evident from their first televised moment. Here is that classic meeting and nine other significant times they shared the spotlight.

When hosting ‘The Hollywood Palace’ variety show on Oct. 18, 1969, Ross introduces the Jackson 5 to perform, and then a 10-year-old Michael participates in comedic skits with Ross and Sammy Davis Jr. In one bit, she begins to announce a special guest and Michael walks on stage before she says his name. When she teases him, saying that he isn’t the person she was referring to, Michael replies,

“Well, who else do you think makes the stage come to real life besides me and Ed Sullivan?”

Ross, Motown’s superstar recording artist, adds her name to their debut album, “Diana Ross Presents the Jackson 5.” In her liner notes for the album, released  Dec.18, 1969, she sings the praises of the family act from Gary, Indiana.

“The Jackson 5 sing honest. Straight out. No tricks. No gimmicks. But good. Very, very, very good,” she writes.

One of Diana and Michael’s best collaborations is their ‘Ease on Down the Road’ duet from ‘The Wiz,’ an African-American adaptation of ‘The Wizard of Oz.’ As Dorothy and the Scarecrow, the two become a pair of giddy school children when they get together. Here, they sing and dance as they skip down the yellow brick road.

Diana and Michael arrive on the red carpet of the Academy Awards, hand-in-hand. When Regis Philbin asks if Michael is her escort, Diana teases, “Absolutely. This is my date, look.” Then she kisses Michael.

Diana is having so much fun performing ‘Upside Down’ at the Forum in Inglewood in 1981 that she decides to spice things up. In the middle of the song, she sends out a request. “Can I get somebody to dance with me? Michael, would you come up?” she asks. Michael emerges from the audience, joining her on the platform. He dances with her, taking the mic and singing a funkier version of the song. Though he is only on stage for a few seconds, it is unforgettable.

The white-suited Michael performs ‘Rock With You’ in a small, nightclub setting for Diana’s 1981 TV special, ‘Diana.’ Part way through the song, Ross makes an entrance from the balcony, running down the stairs to duet with M.J. Their energy together is undeniable. In their matching ensembles, they finish singing the song together with Diana following Michael’s dance lead. Afterwards she tells him, “I love to sing your songs.” When he reminds her of her own massive catalog of hits, she replies, “But I want your hits.”

Though Michael wasn’t able to attend the 1984 MTV Video Music Awards, his friend Diana Ross was on hand to accept his Moonman for the Viewer’s Choice for ‘Thriller.’

At the beginning of her performance of ‘Ain’t No Mountain High Enough’ at the World Music Awards in Monaco in 1996, Ross walks off the stage into the audience to greet Michael, who is sitting in the front row. She hugs him and sits in lap just in time to serenade him with the song’s opening monologue. When she says, “If you need me, call me,” he blushes, covering his mouth in excitement.

The year following Michael’s 2009 death, Diana takes her ‘More Today Than Yesterday: The Greatest Hits Tour’ on the road. She makes sure to reserve some time to remember Michael. “I dedicated this tour to someone I love dearly,” she says before performing her song ‘Missing You,’ Michael’s ‘You Are Not Alone,’ and a snippet of ‘I Love You (That’s All That Really Matters).’ [See 2:40 mark.]