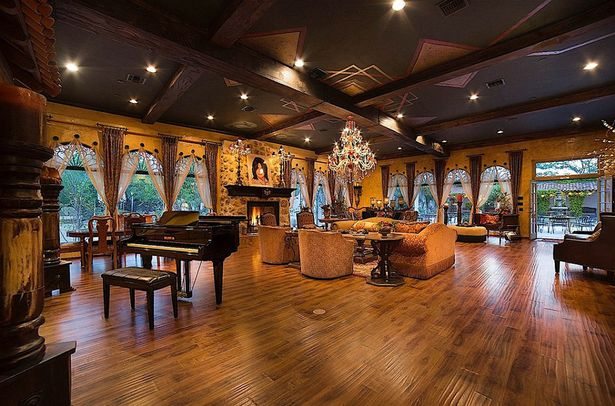 Michael Jackson’s stunning Las Vegas rented mansion has hit the market, giving fans a first glimpse inside his extravagant lifestyle. The music legend rented the huge home, dubbed the ‘Thriller Villa’ on the listing, until his death in 2009, and now it’s on sale for a whopping $9.5 million.

The complex spreads across 1.7 acres, with a 24,276-square-foot main house and a 2,983-square foot guest house. But it doesn’t stop there, as there is also a medieval chapel with each feature shown in full in a dramatic promotional video. The footage shows each room of the stunning home, with the singer’s music playing in the background, and gives an insight into his private life away from the spotlight. With seven bedrooms, twelve baths and elaborate furnishings, the medieval-style home has now been made into a tribute to the star. It houses artwork featuring Michael’s face, and a replica of the boy in the moon statue originally found at Michael’s most famous home Neverland.

The listing, by agent Kristen Routh Silberman, shows photos from inside the property and the walls surrounding it. It was this home where Michael is claimed to have taken his kids to spend time away from the public eye.

According to the listing, it was originally built by theater owner Horst Schmidt in the 1950s in Mexico, before being transported brick-by-brick to Nevada. Several original features remain, the listing states, including the master bedroom which spans a whole floor and includes a wet bar, a fireplace and giant mirrors, where Michael is claimed to have rehearsed his choreography.

There is also a private art gallery/vault hidden in the home’s basement. Showing his secretive side, the basement can reportedly be accessed by an outdoor tunnel, and the singer is said to have used it to escape the paparazzi. It also has a plush salon, with a giant painting of the star sitting above the fireplace. With stunning furnishings inside, wooden panelling and even a roped off piano it gives fans the feeling of heading back in time.

Meanwhile the chapel outside has a painted sky roof, and can seat seventy, the listing claims because it is Las Vegas after all.’ The spacious outdoor area also has a stunning courtyard with a fountain and even room to keep animals.

However, it’s not the first time it’s gone on the market and has reportedly previously been listed four times with the listing being removed each time. In 2014, it hit the market for a staggering $19.5 million, before having $10 million slashed off it.

See all the inside photos