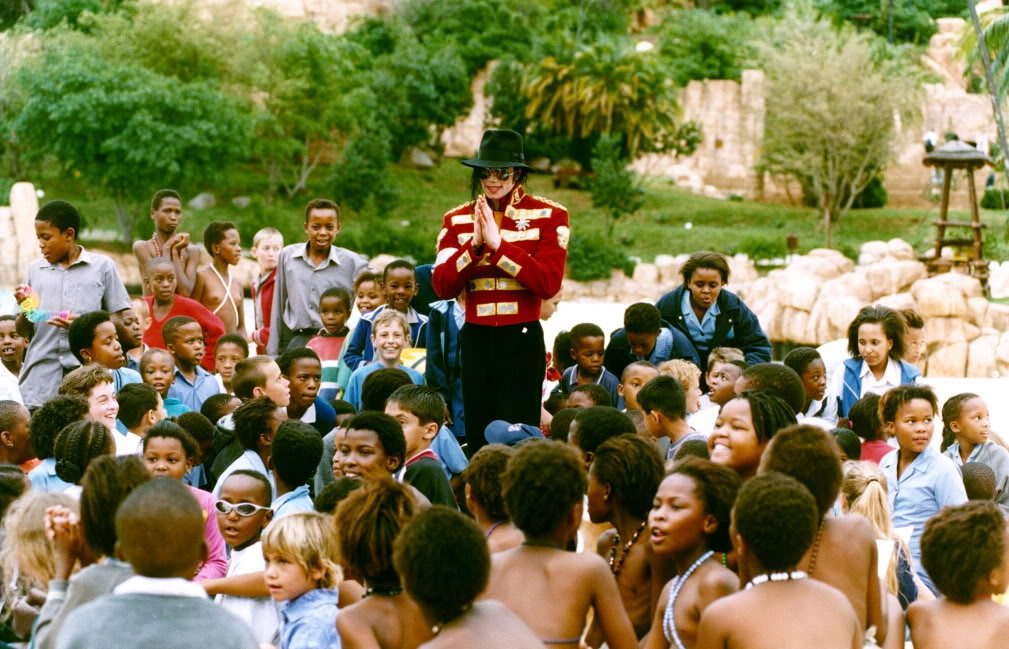 The article reproduced here is taken from Metropole NG (Nigeria) and is a thoughtful and accurate account of Michael’s stardom, helping to reinforce his legacy. ‘Michael Four years later..’ is written by Oris Aigbokhaevbolo.

“Last week was the fourth anniversary of Michael Jackson’s death and I recalled that as a child, my relationship with Michael’s music was organic: he was just always there—there, on television singing ‘I’ll Be There’ in the Pepsi ad; there in the VHS as a terrifying lover; there on the record player as a distinctive singer; and there on my lips as a persistent hum.

In the years since the king of pop’s death, several performers have been named heirs to a throne that doesn’t feel vacant. The frontrunners, Justin Timberlake, Chris Brown and perhaps Bruno Mars have major shortcomings. Justin is perhaps the greatest race-unifying media personality since Michael. A technically good dancer, he lacks the fluid effortlessness and inventiveness of the man’s dance talent. Chris, a remarkable dancer, capable of any dance move, is too divisive for the role and in last few years has become too obnoxious to ever ascend the throne. Bruno Mars shares Michael’s genius for a great tune and borrows from several sources, but he can’t quite dance— he’d always be referred to as “massively influenced by,” but would never be Michael.

These comparisons have been oblique— Mr Brown, in particular, has actively, implicitly sought the title, reproducing Michael in several songs and videos. This has changed with Kanye West, ever the grand performer with grandiose self-projections, chanting on Yeezus, his new album, he is ‘the only rapper compared to Michael Jackson’. For some this is blasphemy— almost like One Direction waking one morning to claim they are the new Fab Four.

But then, Kanye has always had a weird filial, if patricidal, relationship with Michael: he sampled Thriller’s P.Y.T (Pretty Young Thing), he had an MJ effigy in his short film, Runaway, and this year, in an interview with the New York Times, he claimed to have known he was going to be a star the moment he penned the “she had a white friend, looked like Michael Jackson…” line from the 2003 hit Slow Jams. There can be no heir but Mr. West’s ambition is pardonable, and anyway, everyone wants to be associated with greatness.

For Michael, greatness invited scrutiny and more so, hostility. The world could not let him get away with being good and being good at music; he couldn’t be normal. His crime was simple: no one had ever and ever since, combined such outrageous commercial appeal with critical regard and in this era of digital downloads, the pestilence of piracy, and the general evolution of the way the world listens to music, it is safe to bet no one ever will. So, the press elevated his ubiquity to iniquity.

With the first of the allegations, in 1993, the media went to town, happy, grateful to have dirt. At the time, no cases were filed against him, but the media already had him convicted.

Dragged to court years later, he was acquitted but the media refused him reprieve. Even in death, the hounding continues. Some focus on the manner of his death, others on his legacy. There is a nasty, misleading, and obvious attempt by one Bill Wyman who in two pieces published a few months ago in The New Yorker seeks to denigrate his legacy and undermine the album sales of Thriller on the expertise of a certain unknown French aficionado. It is all too much.

But, these are distractions. Michael was a soft spoken person who let the music speak for him. Songs like Tabloid Junkie, and the duet with Janet, Scream— which, alongside its space-themed video predates and forecasts bands like Daft Punk— are more eloquent disclaimers than any number of press statements. Songs like In the Closet were said to be in response to comments in the media about the absence of a sexual edge to his music: an irony, considering the complaints about the sexual content of many pop songs.

There is, however, a way to look at the press celebrity-carnivorous carnival as a good thing. Without those travails of the early ’90s, the hauntingly beautiful Stranger In Moscow, released two years after the initial accusations, would not exist. While the baseline, elaborate arrangements and melody on Scream invited (and still invites) dancing so that it seemed Michael both revelled in and aggressively dismissed the daily diatribe, the sober, slow percussive base of Stranger In Moscow reins in what were surely explosive emotions, allowing the man’s sadness and loneliness to come through in heavy understated gusts.

The words themselves are not so much sung as recited-in-melody, as he bemoans his fame— “Swift and sudden fall from grace…Take my name and just let me be” — with lyrics containing chilling imagery based on the Russian landscape: “Kremlin’s shadow belittling me…KGB was stalking me”. His voice is, by turns eerie, haunting, beautiful. He asks in the chorus, “How does it feel, when you’re alone and cold inside?” Somehow, he is the only one who would really know.

The crowning achievement of the song, however, is the lyrical coda, heartbreaking in the sincerity of the delivery and its ostensibly unscripted lines, “We talking danger, we talking danger…I get so lonely, I get so lonely like a stranger in Moscow.” It is both a cry, and a plea. I do not know many pop songs with such painful potency. I listen to it and recall the epigram in James Baldwin’s Giovanni’s Room, as taken from Whitman:

The song itself was originally a poem written during a tour of Russia that would be abandoned because the media’s tales became unbearable; today, the eternally great song stands as the singular legacy of that tour. But, for all its beauty, I would rather be rid of the song if the genius could catch a break. The world would not be a terrible place deprived, as it were, of one more classic song.

Although organic, the centrepiece of all MJ fascination is Thriller. The video, in particular, received endless play on television. The making of the musical video was even more enchanting: the elaborate makeup, the glue, the playful rehearsal sessions rather than demystify the magic of the video added a layer of technical mastery to the proceedings. As a child, each viewing of the video remained glorious.

That night four years ago when he died, I remembered dancing competitions organised by the adults in the building where I grew up; vigorous contests always won by a certain boy living upstairs. In my eyes at the time, he should have been disqualified: he was a visitor, and he was older than the rest of us.

In retrospect, those adults only convened those dancing sessions just to see the boy dance. I am only just solving the mystery as to why the ‘competition’ only held when he’d come visiting. The conniving adults only wanted to see Michael Jackson in their living room, live. The man himself never toured Nigeria— this boy was the closest they would ever come to their idol. And so while the rest of us, valiantly, awkwardly, re-enacted moves from the videos, we were only distractions.

Two decades later, I am not sure I am still not bitter.

This appeal to all ages, and, in America, all races, was responsible for Michael Jackson’s success. Several singles, for me, were always a dance event, but there are sober, ‘grown up’ ones: Human Nature, remixed in 1992 by SWV and again in 2011 by Chris Brown, remains a favourite for its portrayal of New York at night— I find it a suitable soundtrack for Abuja at dusk; there are not many songs matching the reflexive potency of Man in the Mirror; and there is Who Is It an anguished mid-tempo song about infidelity from 1991’s Dangerous. Michael’s body of music could be a soundtrack to a whole life.

These days, with all the courtroom dramas and tabloid dissections, I find it easier to remember him as that cool kid clearly in love with music, dancing and smiling in the music video for Rock With You, from 1979’s Off The Wall— his first solo album which, he believed, deserved more respect from the Grammys. His sophomore, 1982’s Thriller, would force the academy to pay attention, and release eight awards including the coveted Album of the Year. The moonwalk, performed in 1983, would, as clichés go, capture the imagination of the world. The rest, then, became history. He wasn’t even 25.

Upon his death, articles and columns were a mixed bag of the reverent and the profane. Some Nigerian columnists poured scorn on the man, complacent critics satisfied to sit in old offices telling rehashed lies. So, it was a pleasure to see Jude Okoye’s son in the recent video to the P-Square song, Personally, dancing like the king of pop. Reflect on this: when those moves were originally performed by Michael, the boy’s father and, especially, his uncles were not much older than the boy is now.

Clearly, Michael would outlive his detractors.

For the Western media, intent on championing The Beatles and Elvis Presley as the most successful pop music acts in history, perhaps it is time someone told them in Nigeria— the most populous black country— those artists do not have any music video in their honour. That fact should put an end to a debate that has seen the West demonise Michael while adorning the heads of Lennon and company with halos. In fact, the debate only takes place over there; there is no contention here— we know who is king, we know who’s bad.

Philip Gourevitch, in The New Yorker’s postscript for Chinua Achebe, recounted an incident where the late great novelist admonished an inquisitive member of an audience with the words, “Read our books.” Now, four years after Michael’s death, there is no more fitting tribute to the man’s genius than to listen to his music. Turn down the amplitude of the internet rumours; shred the tabloids; put off the television; and listen to his music.

And, please, feel free to dance along. Michael would approve.”

Source: Metropole Nigeria & MJWN, with thanks as always to Paula