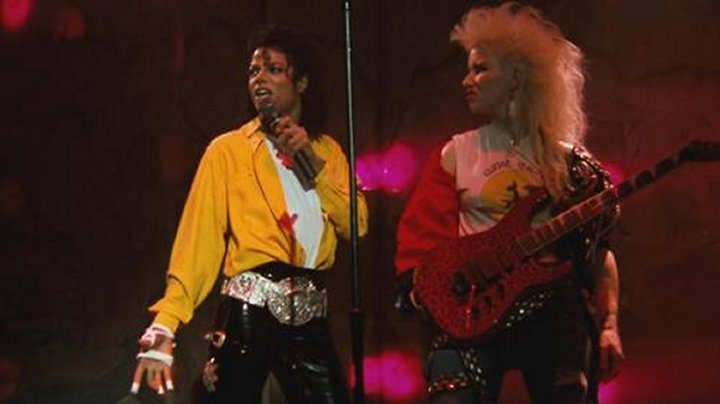 We all know the name Jennifer Batten as the phenomenal guitarist who worked with Michael over many years. Her first tour with Michael was the ‘Bad’ tour. She later went onto perform with him throughout his ‘Dangerous’ and ‘HIStory’ tours, not forgetting the ‘Superbowl,’  therefore you can imagine the delight I felt, being a lead guitarist myself,  when she agreed to an interview for MJWN in Glasgow where she was performing with Navi in his ‘King of Pop’ show.

I was shown into Jennifer’s dressing room and my first impression was that it felt homely. She was busy stringing one of her guitars so I introduced myself and thanked her for agreeing to talk to us.

Jennifer: It’s fun to be back in Scotland. I haven’t been here in quite a while.
Callum: What was your first guitar and the first song you ever learnt?
Jennifer: My first guitar was an off brand thing from a department store that my dad got me when I was eight years old. The Beatles were pretty big and it was quite unusual at that time. I got an electric guitar for my first guitar. I just remember it was red black and blue and you can see a picture of it on the cover of my ‘Momentum’ CD. The first song was by a drummer that was a band leader named Chicco Hamilton. He was a jazz guy and my dad taught me the melody from one of his songs called ‘Florist Flower.’ Just a simple melody.
Callum: Apart from Jeff Beck, who else has inspired you with the guitar?
Jennifer: In the beginning my dad had a guitar, so that was being played in the house. The Beatles were huge and the Stones at that time, so I guess that was the beginning of the guitar consciousness. Everyone wanted to have a guitar in my family. My sister had a guitar and I didn’t, of course that made me jealous, so the next birthday or Christmas I requested one and my dad started us off on lessons straight away.
Callum: You were in quite a few bands in Los Angeles weren’t you?
Jennifer: Tons, yes. By the time I got the Jackson gig, I was in six different bands and most of them were original bands and original bands don’t play every night, or even three days a week, so being six bands would ensure that I play four or five times a month.
Callum: What sort of styles of music did your bands play?
Jennifer: One was like Chili Peppers, kind of rap funk because nobody could sing (laughs). There was one that was like Bruce Springsteen, the leader was an actor and doing some singing on the side. I had my band that was instrumental fusion, the band called Daktari Punk – funk kind of band. There was a little bit of everything. There was a heavy metal cover band. A little bit of variety, that was what I like.
Callum: I know a little bit about the MJ audition. Would you mind explaining how that came about for those who don’t know?
Jennifer: One of his guys, Nelson Hayes, who had been with him for many years helping out starting with The Jacksons, was the guy in charge of finding people. He called Musician’s Institute where I was teaching at the time and asked them to send down two people to audition. That was a lucky break right there, a chance to audition. There was about one hundred people. I didn’t tell anybody. I didn’t want to jinx it. I asked when the last possible day would be so I could stay at home. I cancelled everything and worked on tunes for a couple days. When I went in I was surprised there was no band, just me and a video camera. Michael would see all the video tape later.
Callum: Did he want you to play one of his songs or did he want you to do something else?
Jennifer: As it turned out, in all the stuff I learnt of his, the only thing I played was ‘Beat It’ because I knew that solo from playing it in the cover band for a couple of years and I thought he might find that quite useful! The only guidance I was given once I was there, was to play some funky rhythm stuff, because that would be most of what was required of me. I just improvised something and then improvised a solo which ended up tipping and tapping. I included that on my first record called ‘Giant Steps.’ I finished with the ‘Beat It’ solo. The whole thing wasn’t more than five or six minutes. Then he wanted me to talk into the video camera so he would get an idea of my personality. That was the most stressful part because I didn’t know what to say. I can’t even begin to tell you what I said because it was so long ago. He was the biggest act in the world! It was 1987 for the ‘Bad’ tour.
Callum: You obviously got called back and got an answer machine message. Then you were off to Japan. Is that right?
Jennifer: Well after two months of rehearsal. We rehearsed as one band in a room, singers in another, dancers in another room. We worked on all the live versions of things that he did on the ‘Victory’ tour. We didn’t even meet him for a solid month. I think he saw video tapes of us rehearsing. We had heard if he was happy with what he was hearing when he walked in, he would start dancing, and that’s exactly what he did, so it seem like things were going well They never told me I had the gig, it’s just I kept going back day after day and eventually I got a ticket to Tokyo and a passport.
Callum: How did the first show go in Tokyo?
Jennifer: It was great! I was really nervous about it because I know in the past it’s sound checked or at rehearsals, I could feel really comfortable. All of a sudden when there’s an audience, you can get nervous and the thing is, the big takeaway was, we rehearsed so much and had that down material so well, that there was no question about what the next tune was, what the next chord was so that’s my big takeaway. I really am a believer in rehearsal. The more repetitions you do, the more it stays solid in your grey matter.

Callum: I remember as a child watching the Bucharest ‘Dangerous’ concert and I’m sure it was in ‘Beat It,’ you had that massive fibre optic suit on. It must have taken up twenty feet. Was that not heavy?
Jennifer: That might have been one hundred feet! The guy that was controlling the colours ran a computer behind our amps and I had to be able to run all over the stage.
Callum: Was that not heavy?
Jennifer: No. That was a leather headdress that had two leather piece across the top of my head and a headband. It was pretty lightweight and the fibre optics themselves are lightweight. The thing that was heavy on the ‘Dangerous’ tour…for a few shows, they had me wear a dragon that was custom  fitted on my shoulders. That was just so heavy. People said “man you look so unhappy.” (laughs) I thought my back was going to break!
Callum: How many guitars do you think you’ve owned?
Jennifer: Maybe twenty five. I’m not a collector. I don’t like to change strings. I like my main ones that work and that’s it!
Callum: What are you currently running right now? What’s your current rig?
Jennifer: I joined Fishman and they’ve got a wireless mini system, so this is the frame for it. (She shows me the frame). The mini system is in the guitar case which I don’t use for The Jackson Show. I’m going to the Czech Republic after this to do my own show and I’ll be triggering all kinds of wacky sounds. It’s really cool when I was playing with Jeff Beck.  I have a whole rack full of gear for just for guitar synthesizer and now all the sounds are in the Macbook Air or even an iPad.
Callum: That’s madness really, considering where you were in the 80s.
Jennifer: Night and day difference.

I looked at the guitar she’d been stringing and asked her to tell me about the artwork featured on it along with the autographs.

Jennifer: Her (the artist) name is Pam Alina. She’s done a lot of paintings for Fender. The Hendrick’s series,  there was a Marilyn Monroe series.  She’s really talented. I have three of her paintings at home on the wall. I had her do my first album cover which has incredible airbrush detail. She did the second album cover as well and I’ve had her do a bunch of jackets and guitars. Her best work is on a guitar that didn’t end up sounding that good, so I sold it to the Hard Rock. It was a Ibanez. It had King Tut all the way across it and it had gold leaf material. The entire thing was King Tut’s head. It’s pretty phenomenal and it was such a shame it didn’t sound good, but the painting was done before the guitar was finished, so you never know how they sound.

Callum: And the autographs…who’ve you got on there?
Jennifer: Most of them have gone and been rubbed off. My favourite one was Les Paul that went across the horn, but as I put it in and out the case and was running around the world, it disappeared! I’ve got Jimmy Page here, John McLaughlin, Steve Cropper, British comedian Vic Reeves. The last one was Brad Paisley. He’s a great country player.
Callum: Have you got a favourite place to perform over here in the UK?
Jennifer: Just about everything we’ve done so far with Navi has been beautiful venues. Really beautiful. Theatres are great! This one is beautiful. Yeah it’s very nice. No I don’t have a favourite.
Callum: Is there anything you’d like Michael’s fans to know about you?
Jennifer: Yeah, I’ve got records (laughs) if you want to hear more guitar. In fact on the first record I did ‘Wanna Be Startin’ Somethin,’  I did an instrumental version of that. I do a solo multimedia show with film. Yes, I have done it in the UK but it’s been quite a few years. I usually do a Michael Jackson tribute or at least a Jackson song during the show. I also put together a film for ‘Liberian Girl’ that’s a really pretty one. Sometimes I’ll do individual songs, or a medley. Everything else is available online.
Callum: Do you have a message for the fans?
Jennifer: Keep his legacy alive. His music resonates with so many people. It’s such a joy to see little kids coming to the show dressed like him. Keep that magic that resonated with millions, going through the generations.
Callum: They’ll never be another one like him.
Jennifer: No, never!

As I end the interview, Jennifer plays a few chords of ‘Beat It’ which takes me back to a wonderful time, even though I was a child, when we were all there watching Mr Michael Jackson on stage – What a spectacular memory that is.

For more information or to book tickets for Navi’s King of Pop Tour please visit kingofpoptour.com

For more information on Jennifer Batten please go to batten.com

Callum is lead guitarist for UNF. You can find out more about them at unfonline.com.

Source: Callum Ross on behalf of MJWN with special thanks to Jennifer Batten, Navi and John Patrick of elitetributes.com.