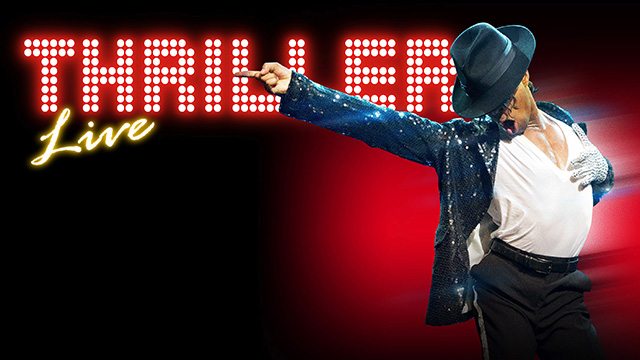 Now in its record breaking 8th year, ‘THRILLER LIVE’ is a spectacular concert created by Adrian Grant and directed by Gary Lloyd to celebrate the career of the world’s greatest entertainer – Michael Jackson!

“QUITE LITERALLY, THRILLING” – The Stage

Already seen by over 3.5 million people in over 30 countries, ‘THRILLER LIVE’ continues to moonwalk around the world, taking you on a visual, audio and electrifying journey through the magic of Michael’s 40-year musical history.

Experience over two hours of non-stop hits from pop to rock, soul to disco in a show that pays homage to Jackson’s legendary live performances and innovative dance moves executed with flair, precision and passion in a show that you will never forget.

Expect your favorite songs delivered by an exceptionally talented cast and live  band, including: ‘I Want You Back,’ ‘ABC,’ ‘Can You Feel It,’ ‘Rock With You,’ ‘Man In The Mirror,’ ‘The Way You Make Me Feel,’ ‘Smooth Criminal,’ ‘Beat It,’ ‘Billie Jean,’ ‘Dirty Diana,’ ‘Bad,’ ‘They Don’t Care About Us’ and ‘Earth Song.’

We have two tickets to see ‘Thriller Live’ in London to give away to one lucky winner. All you need to do is answer the simple question below to be in with a chance of winning.

This competition is now closed

The closing date for the competition is midnight on Friday, June 17th, 2016 and the winner will be notified directly by milktwosugars.com not MJWN.

Terms and conditions apply. Prize is valid for Tuesday-Thursday performances until the 21st July

2016. Subject to availability. Prize is as stated and cannot be transferred or exchanged. No cash alternative will be offered.

Photo of previous cast member is included with this feature.