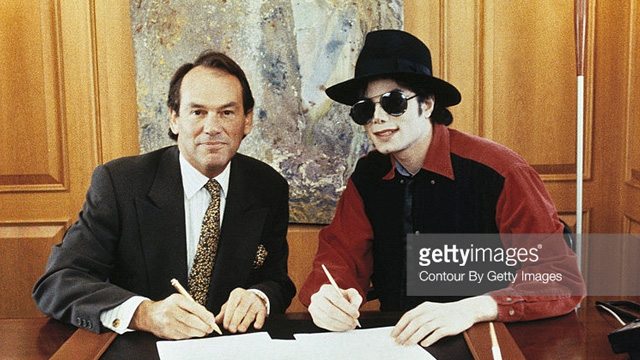 Below is the full press release regarding the sale of the remaining half of the Sony/ATV Catalogue from Michael Jackson’s estate to the Sony Corporation.

Sony Corporation (“Sony”) and the Estate of Michael Jackson (“the Estate”) announced today that Sony Corporation of America (“SCA”), Sony’s wholly owned subsidiary, signed a binding memorandum of understanding (“MOU”) with the Estate to obtain full ownership of Sony/ATV Music Publishing LLC (“Sony/ATV”) by acquiring the 50% interest in Sony/ATV held by the Estate.

The MOU calls for total payments of 750 million U.S. dollars, which includes a lump sum payment by SCA of approximately 733 million U.S. dollars as well as distributions previously committed to by Sony/ATV to be paid to the Estate. The payment also reflects certain contractual and accounting adjustments related to the Sony/ATV joint venture and other commercial opportunities involving Sony and the Estate.

The sale is the culmination of a process that began in September 2015 when Sony exercised a right that has existed since the joint venture was formed by Michael Jackson and Sony in 1995. This right allows for one partner to purchase the other partner’s interest pursuant to a procedure outlined in the Sony/ATV operating agreement.

The parties expect to execute a definitive agreement by March 31, 2016. The closing of the transaction is subject to certain closing conditions, including regulatory approvals. Sony expects that this transaction will have no material impact on its consolidated results forecast for the fiscal year ending March 31, 2016, and its impact on Sony’s consolidated financial results for the fiscal year ending March 31, 2017 is currently being evaluated.

The Estate noted that the transaction will not affect its continuing substantial interests in other music assets, including all of Michael Jackson’s master recordings as well as Mijac Music, the publishing company that owns all of the songs written by Michael Jackson as well as songs by some of his favorite songwriters and artists that were acquired by Michael during his life. In addition, the Estate will also retain its ownership interest in EMI Music Publishing.

“This transaction further allows us to continue our efforts of maximizing the value of Michael’s Estate for the benefit of his children,” said John Branca and John McClain, Co-Executors of the Estate. “It also further validates Michael’s foresight and genius in investing in music publishing. His ATV catalogue, purchased in 1985 for a net acquisition cost of $41.5 million, was the cornerstone of the joint venture and, as evidenced by the value of this transaction, is considered one of the smartest investments in music history.”

“When Sony first partnered with Michael Jackson 21 years ago to create Sony/ATV Music Publishing, we knew that this company had the ability to reach great heights,” said Michael Lynton, CEO of Sony Entertainment, Inc. “This acquisition will enable Sony to more quickly adapt to changes in the music publishing business, while at the same time continuing to be an unparalleled leader in the industry and a treasured home for artists and writers. We want to express our gratitude to the Estate of Michael Jackson and to the Jackson family for their years of partnership. All of us at Sony look forward to continuing to work with the Estate to further Michael Jackson’s legacy in many different ways.”