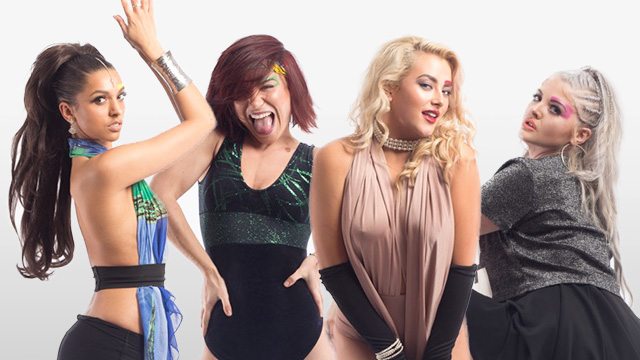 Office Girls are a new British and Irish girl power band based in the UK that have been put together by Ellis Rich OBE, the former boss of Simon Cowell, and Marvin Howell who has worked with artists such as Lady Gaga, Britney Spears and Christina Aguilera.

Known as Miss Bombshell, Miss Nova, Miss Dime Diva and Miss Mocha, the four girls who make up the group have already been hailed as this generations Spice Girls with a twist. They recently had their first single out called ‘Dirty Work,’ a catchy up-beat pop number that will have you on your feet dancing and now have just released their first Christmas single, a beautiful cover of Michael’s ‘Heal The World.’

In addition to the song, the Office Girls also spend their time touring around schools in the UK helping in the fight against bullying and discrimination.

The song is a respectful rendition in both English and French and carries through Michael’s message of love and healing with proceeds from the sales of being generously dedicated to aid the French charity Secours Populaire Francais in light of current tragic events in Paris. In the girls’ own words; “We want to do all we can do to support those affected and use our music to make an impact in the world. MJ is such an inspiration to us and we hope you enjoy our tribute to him and the message he stood for.”

Office Girls message with their choice of song this Christmas is clear; “This Christmas, let’s ‘Heal The World!’”

The girls were also kind enough to tell us a little more about the band and their cover of ‘Heal The World’ in an interview.

MJWN: Tell us a little about who the Office Girls are and how the band came to be?

OFFICE GIRLS: We were actually put together by a great team, our management are incredible and have worked with the likes of Britney, Lady Gaga and Christina Aguilera. We’ve been so lucky to work with them! We are called Office Girls because we are just four normal girls from an office or educational background who have taken the leap to live our dreams. We want every single person out there to see that if we can do it, so can anyone! No dream is ever too big!

MJWN: Now we know that you all are Michael Jackson fans and it’s wonderful to see that his fans have no barriers. Some grew up with the man and some have come on board as fans along the way. The love for Michael has just passed on from one generation to the next. When did you all become MJ fans?

OFFICE GIRLS: It was different for all of us! Some of us grew up dancing to his songs when our parents had him playing, the music became part of us and their love overflowed into our own!

MJWN: Can any of you remember the first video or the first song that you heard of Michael’s that made you say “Wow!” and where you were? How did it effect you?

MISS DD: We grew up listening to it with the family but I have to say it was ‘Earth Song’ that really stole my heart! My mum gave me the ‘Off The Wall’ CD when I was little and I treasured it! ‘Rock With You’ was one of my favourites.

MJWN: How has Michael inspired you?

OFFICE GIRLS: He has inspired us in so many ways. What he stood for and his determination to get a message out to the world is something that has really uplifted all of us! His music is so powerful and he represents for us, how someone can really change the world with song.

MJWN: What made you pick Michael’s ‘Heal The World’ for your Christmas song and whose idea was it? We know that you’re contributing proceeds from the sale of the song to help aid Paris in light of the events that have happened there recently, but why this particular song?

OFFICE GIRLS: We all chose to cover this song as we were so wanting to cover one of MJ’s songs, and this track in particular really resonated the message that we wanted to convey. We wanted a song that spoke not only about how much needs to be done, but also about how much beauty there is in the world. It speaks about standing together and every one of us making a change, and that is exactly what the world needs to hear right now!

MJWN: You also sing some of the song in French. That’s a beautiful gesture for the French people that you are helping with this song. Whose idea was that and do any of you speak French or did you have to learn?

OFFICE GIRLS: A couple of us do speak it and originally we were doing it all in English. But after the Paris events, we felt we really wanted to find a way to honour them, and this felt like such a beautiful way to do it.

MJWN: ‘Heal The World’ is a song with a strong message by Michael to the world. How does that make you feel doing a cover of such a powerful song from one of the most powerful performers that the world has ever known?

OFFICE GIRLS: Honestly it’s a huge responsibility to even try to cover a song by such a legend! But we loved being able to pay homage to Michael and all we want to do is carry on spreading the message he was sharing…It’s not about your religion, colour of your skin, nationality or gender. Every person is equal.

MJWN: If you could, how would Office Girls heal the world and is visiting schools part of that process? Michael also believed that getting his messages across to children was important. What has been the response from the children from your visits?

OFFICE GIRLS: We are doing what we can to ‘Heal the World’ every day! We want to put a stop to bullying, cyber bullying and discrimination. We are currently touring schools all around the UK speaking to young people about these subjects, as well as sharing our music. The response has been overwhelming, the kids are such an inspiration to us!

MJWN: What message would you like your fans and Michael’s to get from your version of the song?

OFFICE GIRLS: We just want people to feel inspired and to take steps in their own lives to make small acts of kindness and love. The power to change the world is in their hands and all we need to do is stand together to make a real impact in the world…We want to get people smiling!

MJWN: Your video for ‘Heal The World’ is beautiful and besides the obvious, that all four of you are in the video, did you have a big part in what went into the actual footage?

OFFICE GIRLS: The footage was chosen by our team, our editor and by us! We wanted to create something emotive that really showed every part of the world and showcased the diversity of the planet. Some of the footage is quite strong but we really wanted to show the contrast of the beauty and war of the world. We also had an extra touch of the song starting with the actual sound the earth makes in space, thanks to NASA, to really add something special!

MJWN: Do you perhaps see yourselves in the future doing another cover of one of Michael’s songs?

OFFICE GIRLS: We’d LOVE to. Keep an eye and ear out. There are just so many amazing songs to choose from its hard to pick!

MJWN: You have gone from a catchy, pop dance number like ‘Dirty Work’ to a song about healing. What can fans expect next from Office Girls?

OFFICE GIRLS: Yes its been quite a contrast! That’s the thing with this group, we are such a diverse bunch that our music can really range! We chose those tracks because they really inspired us and got us dancing, but what’s to come in the new year is the first real taste of what Office Girls are about. Our first original track is coming out February 6th. Its called ‘Put Your Money Where Your Mouth Is,’ and it’s a very pop but street sound. We have some other tracks coming out and I think the fans will really start to recognize our sound. We have strong messages but sick beats too! And the remixes are definitely going to get people dancing!

MJWN: Lastly, is there anything that you would love to say to Michael’s fans this Christmas?

OFFICE GIRLS: We would just like to say thank you, its such an honour to have you all support our music, and we hope you feel we did this song justice! We would love to get all of you involved and to join us on our mission to heal the world! Tweet/ Instagram/ Facebook in #OGHealTheWorld with what every one of you want to do to make a difference!

Thank you to everyone who’s supported us and helped us to raise money for some incredible charities; Secours Populaire Francaise and Save The Children! Share the love this Christmas and lets Heal the World together!

MJWN: We would like to thank the Office Girls for making time to talk to us and wishes you all the best for all your upcoming projects.

Here is a short Christmas message from Office Girls to All Michael’s fans around the world.

For more details on the Office Girls, their school tour dates and on how to help them Heal The World please click here.

Source: OfficeGirls UK & MJWN with special thanks to Radha