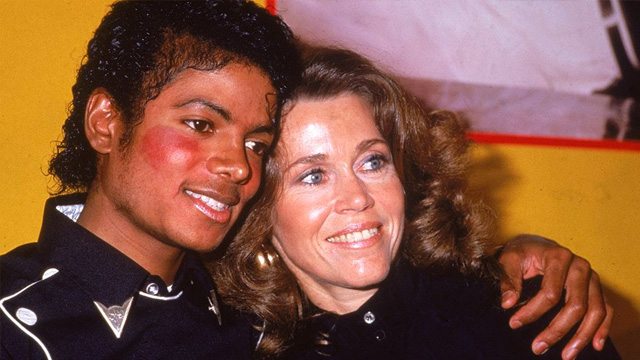 Who would have thought?! Jane Fonda has made the amazing admission that she once went skinny dipping with Michael Jackson!

The 77-year-old actress made the revelation to The Hollywood Reporter, saying that the event, which took place in the early 1980s, occurred when the late King of Pop came to visit her on the set of On Golden Pond.

Fonda recalled that legendary actress Katharine Hepburn had not been pleased when she learned that Fonda was receiving set visits.

“When I first asked her permission, she was not happy,” Fonda recalled in interview. “But then the crew said, ‘You don’t understand, it’s Michael Jackson.’ She was very prickly,” she continued, of screen idol Hepburn. “I mean, she was a snob, she was very moody, she was very judgmental.”

Fonda explained that the “Thriller” singer had moved into her house on the New Hampshire set.

“[He] came and stayed for 10 days,” she told the outlet. “We lived together. I went skinny-dipping with him – also, by the way, with Greta Garbo!”

And although Hepburn had been disapproving initially, Fonda revealed that in the end, she came to accept, and even mentor the young singer.

“[Michael] wanted to be a movie star. He had just finished doing The Wiz, and he had a tape recorder with him, and every day I would bring him to the set, and in between scenes she would sit down in a chair and pull over a chair for him and tell him stories,” Fonda continued. “And every story embedded a lesson.”

One lesson Hepburn imparted to Jackson was about silent film star Laurette Taylor, who the actress felt had lost “the magic” as her career progressed.

“She said to Michael, ‘She wasn’t hungry anymore.’ What a great thing to say to a young, rising star like Michael,” Oscar-winner Fonda said, thoughtfully. “You gotta stay hungry. Don’t ever phone it in. Don’t ever take it for granted. You know what I mean?”