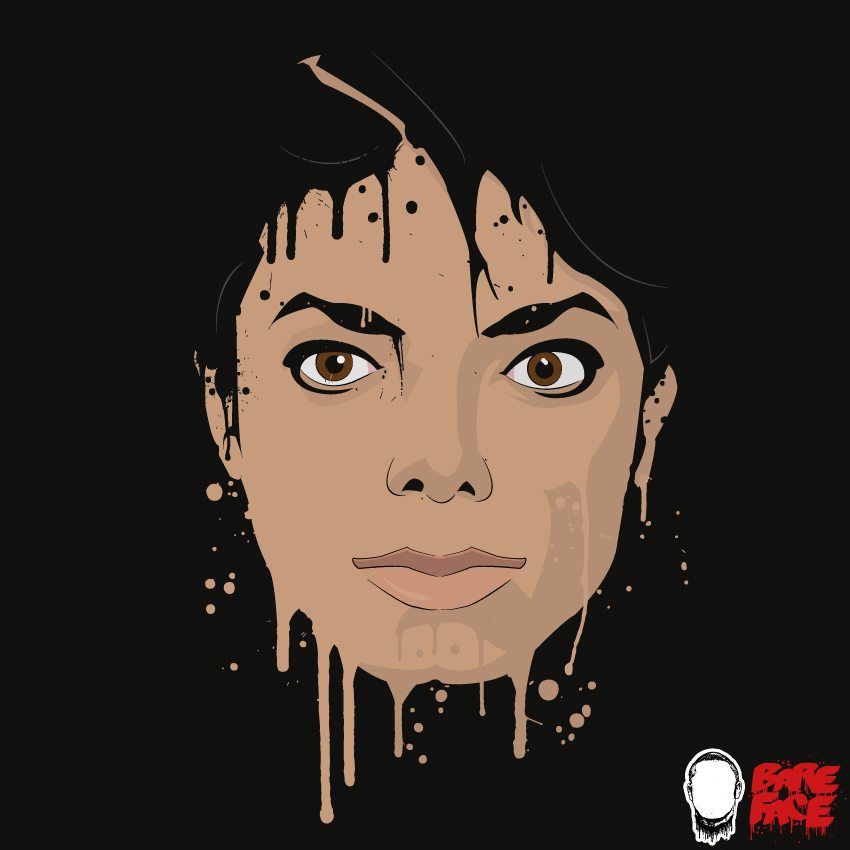 Bareface’s graffiti style artwork was featured on MJWN earlier this year. He specializes in digital art and he has sent us two of his pieces to share with Michael’s many fans. Here they are for you to enjoy.

You can follow his work here on his Bareface blog!

He was also interviewed exclusively by streetintell.com in June, and here’s what they had to say about this artist’s unusual work:

“BAREFACE is a London based, vector graphic artist who is obsessed with real world pop culture. His art ranges from the fifties to the late nineties and beyond. Pulling inspiration from film, music, superheroes, fantasy and more; Bareface creates visually appealing digital masterpieces. He has always had a fascination with different aspects of pop and hip-hop culture, namely graffiti. Intrigued by graffiti but not wanting to vandalize buildings, the artist’s curiosity led him to exploring how to translate graffiti street art to digital canvas. Thus the BAREFACE brand was born.

His vibrant use of colour and trademark drips pay homage to Pop and Spray Can art. His work has been featured on several blogs including the popular Michael Jackson Fan site the Michael Jackson World Network (MJWN.) His sticker designs have also received critical acclaim showcasing at the April 17th MLT SLAPS sticker Expo in Montreal.

The artist first caught our eye with his dynamic adaptation of one of pop culture’s most revered villains, Darth Vader.

We had an opportunity to link with Bareface and find out more about the brand. Check out our exclusive interview below:

SI: Explain the premise behind the Bareface brand? What does it all stand for?

BF: The ‘Bareface’ brand refers to my belief that my appearance bares no significance to my body of work. It refers to a blank canvas and being creative as the mood takes me.

SI: Your illustrations feature a lot of cultural icons. How important is pop culture in influencing your work?

BF: I grew up in the 80s and as a child I spent a lot of my time watching TV shows, cartoons, listening to music and reading comic books. Pop culture was my education about life and helped shaped my vision of the world. I was inspired by the media of that time and I use this to bring my superheroes to life on digital canvas.

SI: A lot of times people down play the field of Art because they rest on the notion of the “starving artist,” What motivates you to continue creating your art?

BF: In the Bhagavad Gita [which is a collection of sacred texts from India] it says “You are not entitled to the fruit of your labor, only the labor itself.” I believe this means that if you rely on things like money too much, you will only be miserable.What is more satisfying than money is doing the work; that feeling of euphoria when you are in the creative zone and the joy or sadness it brings to others. Basically, what motivates me to continue creating art is my desire to grow organically with the world around me and the happiness I get from creating. Whether you are financially prosperous or not, you have to be “starving” to be successful. You have to keep on pushing yourself and have the hunger to do and be better.

SI: Where do you hope your art takes you?

BF: My mission?…”To chase the muse and see where she will take me.” I have no plan, I am just enjoying creating these pieces and sharing them with as many people as possible, whether it’s online or at a gallery exhibition, and the fact you have found me and I am talking to you means that it’s working. I’m hoping that my pieces will bring joy to people, who find and enjoy my work.

Source: MJWN, streetintell.com, with special thanks to Bareface