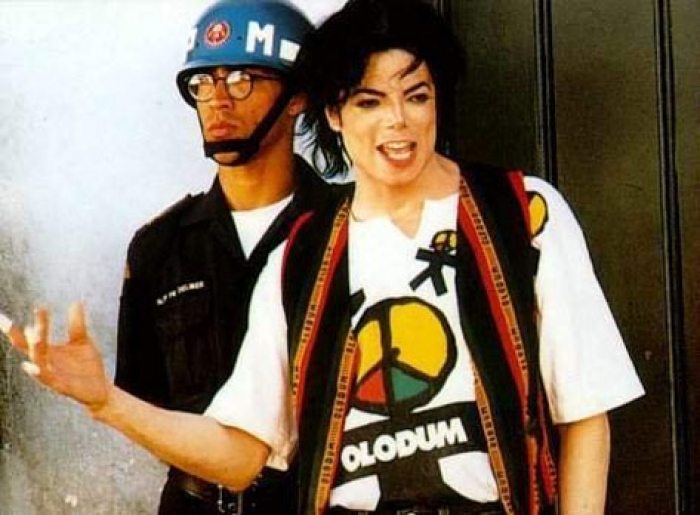 Here is an account of a visit to the Brazilian favela, by Fusion Soccer’s Mariana van Zeller, where Michael Jackson filmed ‘They Don’t Care About Us.’

In Rio De Janeiro they do really care about Michael!

In 1996, Michael Jackson released two videos for his controversial song, ‘They Don’t Care About Us.’ Amid protests from the Brazilian government, one of these was filmed in Santa Marta, a favela in Rio de Janeiro (“Favela” is Portuguese for “slum”.) The video was directed by Spike Lee and featured the Olodum internationally acclaimed Afro-Brazilian cultural group from Bahia, Brazil.

Olodum (pronounced oh-lo-doon) which was founded in 1979 as a bloco afro (African Bloc), a Bahian Carnival association highlighting African heritage and black pride through music, dance theater, and art.

From their home city of Salvador da Bahia in Northeast Brazil (often described as the most African city in the Americas), Olodum has dedicated itself to cultural activism in the struggle against racial discrimination and socioeconomic inequality.

Olodum takes its name from the Yoruba deity Olodumaré. They focus their yearly Carnival themes on controversial issues such as black power and socialist movements in Africa and the African Diaspora. In the mid 1980s, the head drummer in the group – Mestre Neguinho do Samba – experimented with Afro-Caribbean rhythms and mixed them with the Brazilian samba. He divided the large surdo bass drums into four interlocking parts and layered the high-pitched repique drums in additive rhythms on top. The result was a new style of music dubbed samba reggae that quickly dominated Bahian Carnival. In the late 1980s Olodum assumed premiere position among the blocos afro in Bahia and became internationally known. They formed a professional musical band Banda Olodum which has now recorded over ten CDs. Olodum musicians have worked with international luminaries such as Michael Jackson, Paul Simon, and Spike Lee.

Fusion Soccer’s Mariana van Zeller visited this neighbourhood 18 years later to learn more about the story behind the video. It was the gangs, she learned, that gave Michael security when he visited.

See the video here to learn more about the King of Pop’s visit to the neighbourhood, what it’s like today, and how World Cup fever is very much alive and well there.