‘Do The Bartman’ Lyrics 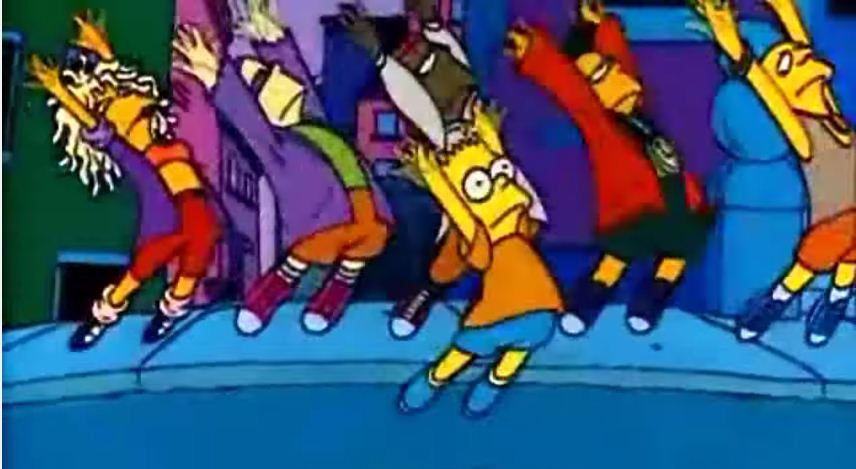 Here is another song that Michael was involved with, it’s from one of his favourite T.V. shows, namely ‘The Simpsons.’ This song was released as a promotional single on November 20, 1990.

Michael co-wrote ‘Do the Bartman’ with Bryan Loren some time in 1990. It is rumoured that Michael actually appears as one of the singers in the chorus. The song is performed by Nancy Cartwright who does the permanent voice-over for Bart Simpson’s character on ‘The Simpsons’ animated series.

The Simpsons were at No.1 on the UK singles chart with ‘Do The Bartman.’ The song was written by Michael Jackson and Bryan Loren and, ‘The Simpsons’ became the first cartoon characters to make No.1 since the Archies hit ‘Sugar Sugar’ in 1969. Michael was a massive fan of ‘The Simpsons’ and had called the producers one night offering to write Bart a number one single and do a guest spot on the show. Bart’s name incidentally is based upon BRAT!

‘Do The Bartman’ was taken from the Simpsons album ‘The Simpsons Sing the Blues,’ which features Bart Simpson… … It was later revealed by creator Matt Groening that Michael did indeed co-write the song.

‘Do the Bartman’ was never officially released as a single in the United States, but topped the charts in Australia, Ireland, New Zealand, Norway, and the United Kingdom. Additionally, it reached the top ten in Sweden and the Netherlands, and was certified gold in the United Kingdom. A music video, which was directed by Brad Bird, was released for the song in 1991. The video became a hit on the American network MTV and received a nomination at the 1991 MTV Video Music Awards.

However, ‘The Simpsons’ creator Matt Groening revealed during an appearance at the 1998 World Animation Celebration convention in Pasadena, California that ‘Do the Bartman’ was actually co-written and co-produced by Michael, but he could not receive credit for it because he was under contract to another record label. Groening told a crowd at the convention that had gathered for a “The Simpsons tribute” that it had,

“Always [been] amazing to me that no one ever found out that Michael Jackson wrote that song. […] He was a big fan of the show.”

Nancy Cartwright, whose is the voice of Bart, reveals that Michael produced the novelty song, ‘Do the Bartman.’

“That was him, but they could never say it,” she says.

Bryan Loren Hudson the co-writer of ‘Do The Bartman’ is an American singer-songwriter, recording artist and record producer. His credits include the number one single ‘Do the Bartman’ (1990), and the number 23 R&B single ‘Lollipop Luv’ (1984).

Loren worked with Michael again, in 1991, on Michael’s album ‘Dangerous.’ He played drums, and other percussion instruments, on that album.

Here are the lyrics to the song,

Terrorizin’ people wherever I go.

Fixin’ test scores to get the best scores,

Droppin’ banana peels all over the floor.

I’m the kid that made delinquency an art.

I’m here today to introduce the next phase,

The next step in the big Bart craze.

I gotta dance real easy to do.

I learned it with no rhythm and so can you.

So move your body, if you got the notion,