One More Chance To Bid For MJ Items 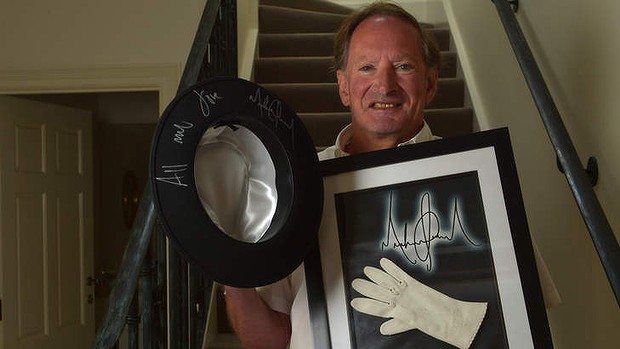 As a boy growing up in England, Tim Fredman was an avid autograph hunter at a time when this was one of the most popular hobbies.

Tim had a bit of an advantage. His grandmother knew variety artist Sophie Tucker whom he regarded as a second grandmother. One of his first treasures was a signed photo of her, dated 1959.

Guests at his parents’ home in Surrey included Danny Kaye. And Tim soon had the hottest autograph book in the district.

Fredman eventually became a barrister in London but his fascination with history, which he studied at Oxford, inspired him to continue his fascination for what is now known as celebrity memorabilia.

Fredman now lives in the Melbourne suburb of Brighton. His collection will be sold at the Theodore Bruce showrooms in Sydney on March 30. The auction starts at 2pm with his collection of Dinky toys, another of his childhood hobbies.

The sale catalogue reflects a life spent on the fringes of showbusiness. The soundtrack album of the James Bond movie Thunderball was signed by Sean Connery because Fredman was invited to attend the London premiere.

He also asked Connery to sign some lobby cards. He notes that the music was composed by John Barry who was married to actress Jane Birkin. He’d gone to school with Jane’s brother.

Another friend in London was recording engineer George ”Porky” Peckham who worked at The Beatles’ Apple Studios from 1968. Through Peckham he organised to have copies of LP records signed by John Lennon and Led Zeppelin, among many others.

“Later he became fascinated by Michael Jackson and through a contact in America bought some memorabilia, including the hat worn on the ‘Billie Jean’ video. More recently, he has became interested in Lady Gaga. ”To me she’s like Michael Jackson re-incarnated.””

How he came to own one of her stage dresses is a typical Tim Fredman story. He has a friend in Britain whose daughter was diagnosed with a terminal illness. The daughter, now 16 and doing well, runs an online shop to raise funds for her medical expenses.

Lady Gaga has donated several items of clothing with her endorsement. Tim bought the dress which comes with an email of authenticity from Lady Gaga.

Also in the mix are signed photos of Clarke Gable, a shirt worn by James Dean, signed autobiographies by Alfred Hitchcock and Nelson Mandela, and a formula one poster signed by Aryton Senna. His tastes are nothing if not eclectic.

Celebrity-based auctions are big in Britain and America, but a rarity here, where bidders still seem suspicious of signed items. Fredman has supplied documentation for much of the sale, ranging from certificates of authenticity to personal emails, as is the case with Lady Gaga.

James Nicholls of the auctioneer Theodore Bruce is also cautious. ”If anyone doubts anything before the sale, we’ll pull it out,” he says.

Auction houses are sensitive about this issue. Buyers are protected up to a point by the Trade Practices Act if the catalogue description is considered misleading, but auction houses would rather delete an item than risk their precious reputations.

Fredman says he tends not to buy from online auction sites where, according to various guesstimates, up to 70 per cent of ”signed” items are either phoney or not verified. ”There are a lot of fakes out there” he says.

In his case, he was usually there when the celebrities supplied their signature. He didn’t realise the potential value of what he had collected until he donated a signed John Lennon LP to a charity auction and was surprised when it sold for $7000. Most items in this sale are offered for a lot less.

A percentage of proceeds will go to The Hush Music Foundation which Fredman and his wife, concert pianist Janine Sowden, support.

Melbourne viewing is on Sunday, March 23 (10am to 4.30pm) at Higinbotham Hall, Parliament and Bay streets, Brighton. Auction is on March 30 at the Theodore Bruce showrooms, 31 Queen Street, Beaconsfield, Sydney.

The sale starts at 2pm. The catalogue is online.