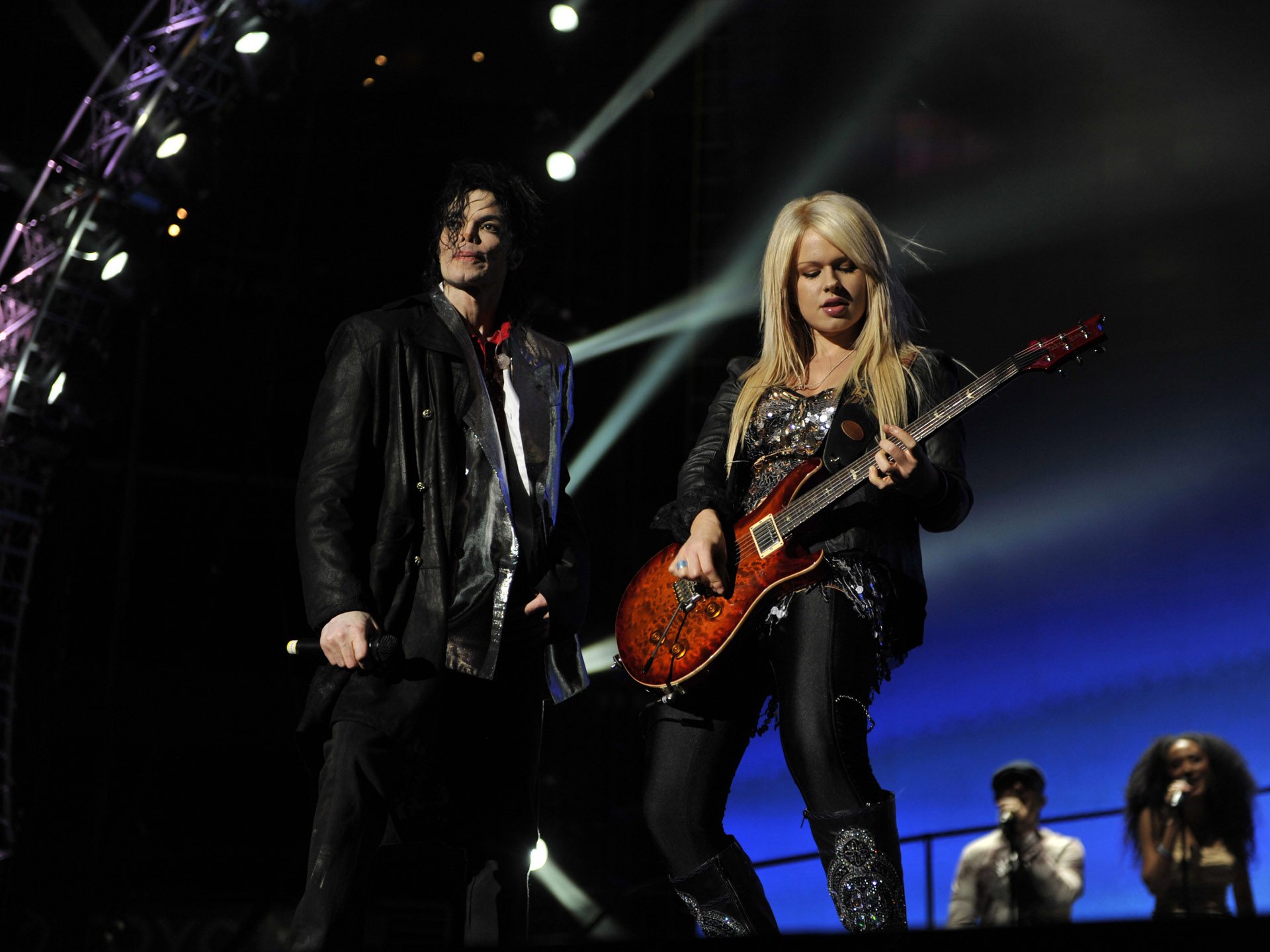 Optek Music Systems, Inc., makers of the Fretlight Guitar, announced today that rock guitar superstar Orianthi Panagaris will endorse the Fretlight learning system. The 29-year old Australian sensation, handpicked by Michael Jackson to play lead guitar on his ‘This Is It’ concert tour, is internationally recognized as one of the best guitar players in the world.

To her disbelief, Michael Jackson asked if she would join his band on his ‘This Is It’ concert series in London. She readily accepted and immediately joined the ranks of prestigious guitarists who worked with Jackson, including Eddie Van Halen, Slash and Jennifer Batten and more.

Sadly, the world lost one of its most treasured musical icons and the tour never happened. However, Orianthi was present at all the rehearsals prior to Michael’s death, and considers the lessons learned working with the King of Pop as some of the most profound of her career.

Orianthi joins the ranks of music legends Alice Cooper and Chris Isaak as the newest ambassador for Fretlight, the world’s fastest and most innovative way to learn to play guitar.

Orianthi has won fans the world over with her original music as well as for her jaw-dropping lead guitar work for the likes of Santana, Michael Jackson, Steve Vai, Alice Cooper, Michael Bolton, Prince, ZZ Top, Adam Lambert, Carrie Underwood, John Mayer, Dave Stewart and others. Currently on tour in Germany, Orianthi returns to the U.S. to rejoin Alice Cooper on the Motley Crue Farewell Tour in July. In 2013 she released her second major studio album, Heaven In This Hell, produced by Stewart.

The partnership with Fretlight will ultimately include an endorsed product line to excite a new generation of guitar players. With her message of inspiration and empowerment, Orianthi provides Fretlight with a spokesperson who is not only able to reach a broad consumer demographic, but also has rock-solid credibility among the most hard-core players.

“I’ve always looked for ways to inspire people, especially young people, to play guitar,” said Orianthi. “When I first saw Fretlight, I immediately connected with the vision.  Today’s kids expect technology to help them on their journey, and that’s exactly what Fretlight does.”

Industry studies indicate that 80 percent of first-time guitar players eventually give up because of the slow, difficult and often frustrating process of learning to play.  The Fretlight Guitar breaks down these difficult barriers by eliminating the back-and-forth routine from traditional books and diagrams.  The Fretlight Guitar truly has something for every level of player.  Ideal for beginners wanting to play their favorite riff fast, to advanced players looking to audition new scales and improvise new solos.

“We’re very proud to have a player of Orianthi’s talent on our team, helping with this important cause,” said Rusty Shaffer, CEO and inventor of the Fretlight Guitar. “She immediately understood that Fretlight is all about getting more people to experience the joy of playing guitar, even if they’re complete beginners. We’re hoping more artists will step up and join us, the way Ori has, to help create more guitar players.”

Based in Reno, Nevada, Optek Music systems is the manufacturer and distributor of the groundbreaking Fretlight Guitar Learning System.  Invented in 1987 by Optek founder and CEO Rusty Shaffer, the Fretlight Guitar has changed the way the world learns to play by combining advanced digital and LED technologies within the timeless form and function of classic electric, acoustic and bass guitars.  Optek has many U.S. and international patents as well as patents pending for its interactive guitar learning systems and musical instrument manufacturing designs. Fretlight Guitars can be purchased at select retailers or online at www.fretlight.com

A guitar prodigy from Adelaide, Australia, Orianthi was heavily influenced by the music of Jimi Hendrix, Eric Clapton, Santana, Cream and others introduced to her by her musician father. Growing up in the mid-80’s, she also listened to and studied the techniques of guitar rockers Van Halen, Whitesnake, Aerosmith, Guns n’ Roses and Joe Satriani. At 15, she left school to pursue her passion full time, playing in a local cover band in Adelaide. When she opened for Steve Vai and ZZ Top, her world changed forever. Upon hearing of her, Carlos Santana asked Ori to jam with him during a tour stop in Adelaide, inviting her on stage to play for her home town audience. At the age of 20 she launched her career in earnest with her first independent release, Violet Journey, in 2005. A year later she realized her dream of moving to America where she signed on with Geffen. After an on-stage appearance with Carrie Underwood at the 2009 Grammy Awards, she went from little-known lead guitarist to the latest buzz on the internet.

To her disbelief, Michael Jackson asked if she would join his band on his ‘This Is It’ concert series in London. She readily accepted and immediately joined the ranks of prestigious guitarists who worked with Jackson, including Eddie Van Halen, Slash and Jennifer Batten and more.

Sadly, the world lost one of its most treasured musical icons and the tour never happened. However, Orianthi was present at all the rehearsals prior to Michael’s death, and considers the lessons learned working with the King of Pop as some of the most profound of her career.

In the fall of 2009, Orianthi released her major label debut, Believe. The album produced the platinum single ‘According To You’ which was a worldwide hit. Coming off the success of Believe and headlining shows around the world, Orianthi was asked to join Alice Cooper’s band for its 2011 U.S. tour. She has continued to tour with Alice Cooper through 2013 and will rejoin the band in 2014.