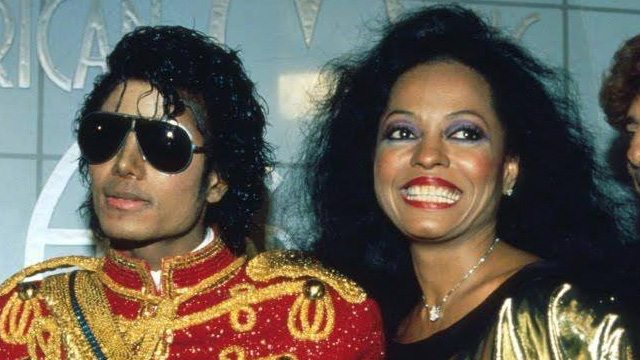 Today is the 30th anniversary of Michael winning an unprecedented eight awards at the 11th American Music Awards in 1984. It was broadcast live from the Shrine Auditorium in Los Angeles, which he attended in the company of Brooke Shields. He was dressed for the occasion in a red ‘Sergeant Pepper’ military style jacket covered with red sequins, cropped tuxedo pants, black aviator glasses, and with a single black sequin glove.

At the age of only 25, Michael was the youngest recipient of the special Award of Merit for his lifetime career achievements. The award was presented to Michael by Diana Ross and by the previous year’s winner, Kenny Rogers. Barry Manilow also took part in the tribute, singing ‘Ben’ and a medley of Jackson 5 hits. The presentation featured video taped messages from Michael’s closest friends, including Liza Minnelli, Katherine Hepburn, and Jane Fonda, who had this to say:

“Michael, I can’t tell you how many times I’ve studied your tapes, trying to figure out what it is you do. I’ve decided you are a miracle. You have so much talent, the more you give of it, the more you seem to have. I’m so proud of you… and so proud to be your friend.”

On receiving the special American Music Award Of Merit from singer/actress and long-time friend, Diana Ross, he declares:

“Thank you. Thank you very much. I’m so deeply touched and deeply honoured to receive this wonderful – Gosh, wonderful award… I thank you, American public; I thank Berry Gordy of Motown, who has been such an important part of my career and life. I thank again my mother and father who brought me into the world – Joseph Jackson and Katherine Jackson. I thank all my brothers – Tito, Jackie, Jermaine, Marlon and Randy, who I started with… and still am with. I thank Susanne de Passe who has been such an important influence in my life and has taught me so much. Thank you, Susanne. Quincy Jones is a wonderful person, not only is he an incredible producer, he is a wonderful man, he is such a family person, and I love him and we have made history together and I’m thankful. I thank one of my favorite people in the whole entire world, Miss Diana Ross and… she’s been such a special friend to me and taught me so many incredible, important things… and I’m so honoured that she came here… I just hope I didn’t leave anybody out, I just – boy, the American public and I thank all the disc-jockeys and everybody, I love you so much and thank you.”

The show was viewed by over sixty million people and in the week following Michael’s swoop in capturing 39% of the evening’s awards, ‘Thriller’ sold a further one million copies in America.