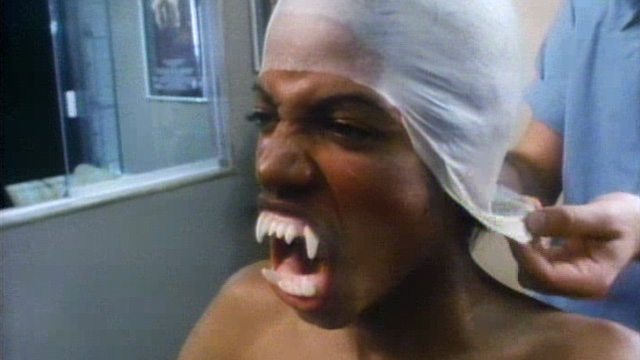 Michael Jackson’s video for ‘Thriller’ was released nearly 30 years ago, on December 2nd, 1983. Director John Landis (The Blues Brothers, An American Werewolf in London) extended the track — the seventh and final single released from the ‘Thriller’ album — into a nearly 14-minute-long musical horror film, letting Michael indulge his monster-movie fantasies. It got saturation play on MTV and has been seen more than 149 million times on YouTube.

Just in time for Halloween, here’s 12 things you might not have realized the first time, or the 200th time, you watched it:

1. All ‘Thriller,’ Some Filler

The video cost half-a-million dollars; at the time, it was the most expensive video ever made. But CBS Records wouldn’t pay for a third video from Thriller, and MTV had a policy of never paying for clips. Michael and Landis funded their budget by getting MTV and Showtime to pay $250,000 each for the rights to show the 45-minute The Making of ‘Thriller.’ (MTV reasoned that if they were paying for a movie, they were circumventing their own policy.) Landis nicknamed the stretched-out documentary The Making of Filler.

2. Before songwriter Rod Temperton came up with ‘Thriller,’ Michael’s working title for the album was Starlight.

Temperton, a British native formerly of the funk band Heatwave, also wrote ‘Baby Be Mine’ and ‘The Lady in My Life’ for ‘Thriller’ (and earlier, had penned ‘Rock with You’ and ‘Off the Wall’ for Michael).

The opening title card (“Due to my strong personal convictions, I wish to stress that this film in no way endorses a belief in the occult”) was inserted due to Michael’s Jehovah’s Witness faith. Another manifestation of his piety, according to producer Quincy Jones: During the recording of Thriller, in a studio in the Westlake district of Los Angeles, “a healthy California girl walked by the front window of the studio, which was a one-way mirror facing the street, and pulled her dress up over her head. She was wearing absolutely nothing underneath.” Jones stared, as did Temperton — but Jackson hid behind the mixing console so he couldn’t catch a peek.

“In adolescence, youngsters begin to grow hair in unexpected places and parts of their anatomy swell and grow,” director John Landis explained, regading the role of the werewolf metaphor in cinematic history. “Everyone experiences these physical transformations in their bodies and new, unfamiliar, sexual thoughts in their minds. No wonder we readily accept the concept of a literal metamorphosis.” In other words, undergoing a lycanthropic transformation was a safe way for Michael Jackson to experiment with puberty.

Jackson’s ‘Thriller’ co-star, former Playboy Playmate Ola Ray, also appeared on Cheers and in Beverly Hills Cop II, but her only other notable music video was ‘Give Me the Night’ by George Benson (a single also written by Rod Temperton and produced by Quincy Jones!), on a date with Benson that involves hot dogs and champagne. That video’s biggest special effect: Benson playing guitar on roller-skates.

Hollywood legend Fred Astaire, a fan of Jackson’s dancing (Michael personally taught him to moonwalk), attended a ‘Thriller’ rehearsal. Jacqueline Kennedy Onassis, who edited Jackson’s Moonwalk autobiography, logged some serious hours: When they were filming at 3 A.M. in a bad neighbourhood in east Los Angeles, she was hanging out in Jackson’s Winnebago.

7. The ‘Thriller’ choreographer was a ‘Beat It’ gang member.

Choreographer Michael Peters also did the epic dance sequences in Pat Benatar’s ‘Love Is a Battlefield’ and in Michael’s ‘Beat It’ video (where he played one of the gang leaders — the one dressed in white, with sunglasses and a moustache). He won a Tony for his work on ‘Dreamgirls’ and died of AIDS in 1994, at just 46 years old.

8. The appeal of zombie-dancing is global.

The largest number of people doing the ‘Thriller’ zombie-dance routine, according to the Guinness Book of World Records: “13,597 participants in an event organised by the Instituto de la Juventud del Gobierno del Distrito Federal at the Monumento a la Revolucion, Mexico City, Mexico, on 29 Aug 2009.”

9. There should not be business classes based on ‘Thriller.’

John Landis on the motivations behind making ‘Thriller’ and its huge financial impact: “The reality is, it was a vanity video. Everything that happened on ‘Thriller’ happened because Michael wanted to turn into a monster. None of it was planned. I want to make that clear, because there was a course taught at the Harvard Business School on ‘Thriller,’ and it was complete bullshit.”

10. ‘Thriller’ may have the ability to possess you.

11. The video looks great even when it’s rendered in Lego.

When horror-movie legend Vincent Price (House of Wax, Edward Scissorhands) recorded his spoken word, he did a whole verse that got cut: “The demons squeal in sheer delight / It’s you they spy, so plump, so right / For though the groove is hard to beat / Yet still you stand with frozen feet / You try to run, you try to scream / But no more sun you’ll ever see / For evil reaches from the crypt / To crush you in its icy grip.”