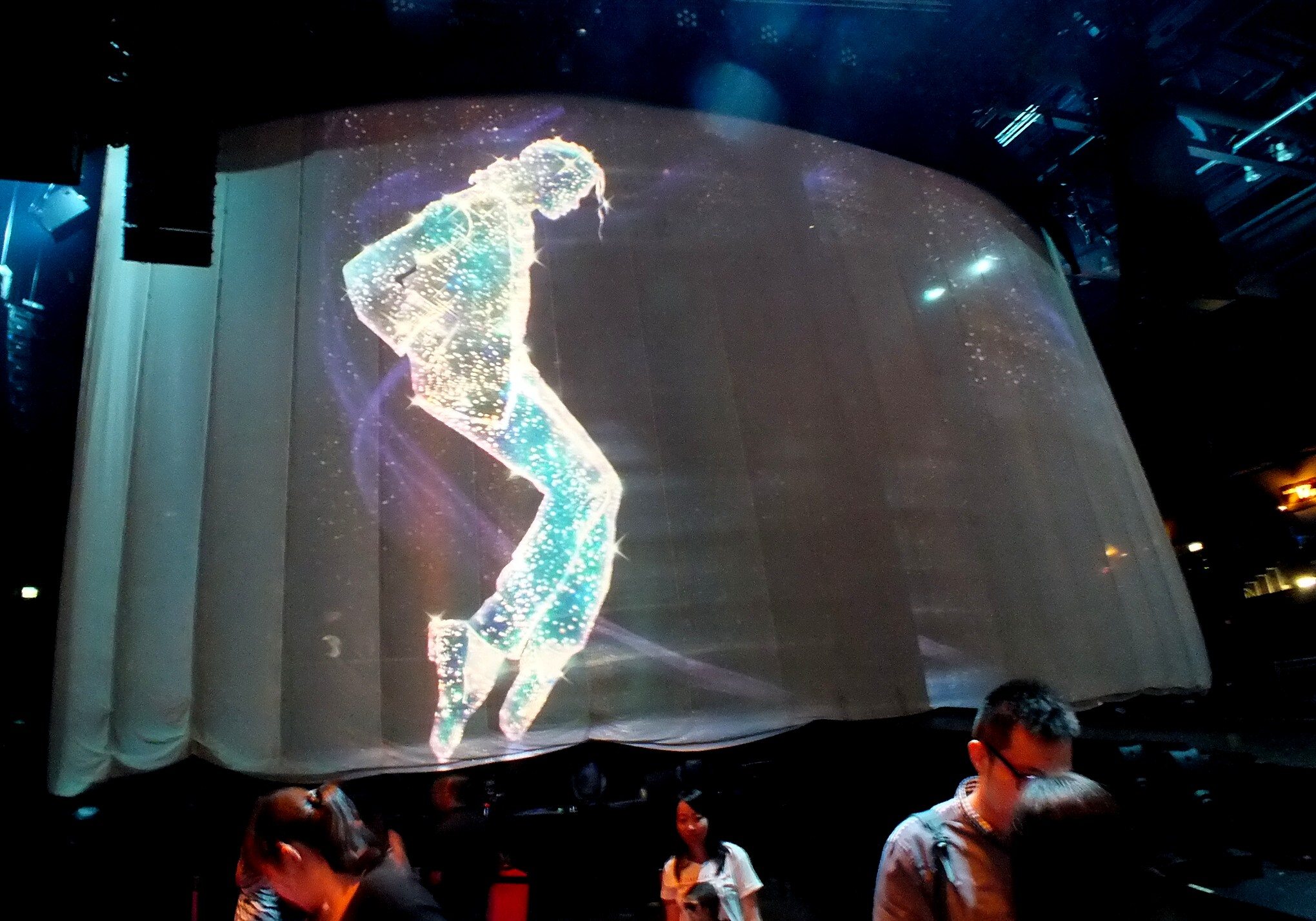 It’s true, Bubbles grabbed my shoulder on his way from the back of the arena to the stage at AsiaWorld-Expo, Hong Kong, during the Saturday night performance of Cirque du Soleil’s ‘Michael Jackson the Immortal World Tour.’

I had been hoping for a high five from Bubbles – One of my favourites amongst the exceptional Immortal cast. Instead I got a strong grip on the arm which left me relieved I’d never tried that with a real chimp!

It was the 24th August, 2013, and the Hong Kong and Mainland China MJ fans were out in force. My seat was amongst the latter, and did those guys know how to have fun! Their enthusiasm was matched by the local fans grouped on the opposite side of the arena from us.

I’ve been blessed to see Immortal in the US and UK amongst truly appreciative crowds, but nothing quite matched the Hong Kong experience. There was no holding back the emotional outpouring of love for Michael or appreciation of the Cirque performers who danced, swung, contorted and tumbled to MJ’s music.

At the Peak & Times Square

At the Peak & Times Square

My visit to Hong Kong was timed to take in three shows on the nights of Friday 23rd, Saturday 24th and the Sunday matinee show of 25th, with some of my MJ friends who live in HK and Macau. They had arranged activities to fill the rest of my short visit to one of my favourite holiday destinations. This included a quick trip to Hong Kong Island to see (again!) Michael’s wax figure at Madame Tussaud’s on The Peak.

My friend, Miranda, told me that it was the final day for Michael’s figure to be on free public display at the entrance to Madame T’s. He had been there since before the 25th June anniversary and had drawn such crowds that it was wisely decided to leave him there until Immortal came to town. Certainly during our visit, he was still attracting crowds that ranged in age from grannies to babies. (It actually brought a lump to my throat to see the youngsters cling to his legs and even crawl between them in the case of one little boy! It reminded me of photos of Michael’s children holding on to their Daddy or clinging to his legs while in the company of others).

Hong Kong was full of Chinese tourists, but the fans who arrived at the arena for the show on Saturday night had mostly come just for that night, just for Immortal. The group photo of them and us (i.e. the HK fans and a couple of us from other Pacific Rim countries) is pretty impressive, especially with most of the group wearing their free VIP ticket t-shirts and a large number waving LED lighted gloves!

Just as there had been changes in the show between Las Vegas and London, there were more changes evident since those London shows I attended at the O2. Overall the production seemed a bit tighter and a bit more polished, if that is possible and there was a bit more focus on members of the live band than I remembered…and deservedly so too.

We still had Michael on the big screen behind the performers – Inevitably bringing the biggest cheers of the night, irrespective of what was happening down on stage; while the spectral-like image of Michael on the curtain during the final minutes of ‘Will You Be There’ still had plenty of us in tears.

The ‘Dangerous’ pole dancer’s routine seemed more extreme than ever, the ‘Is It Scary’ contortionist more flexible, and the ‘I Just Can’t Stop Loving You’ aerialists’ routine even more romantic than I remembered. And, of course, there was Bubbles – A wonderful performance that had some of us ‘believing’ there was a real chimp inside that familiar costume!

The central mime character who guides us through the story did his usual incredible job as the ‘glue’ that binds the different segments of the show together – Keeping us spellbound while, behind the curtains, the set is being redressed and the performers are getting changed for another big production number.

I thought I knew what to expect in terms of how the fans would react to different parts of the show…but Hong Kong surpassed anything I had experienced elsewhere. At times it was like being at an Australian Rules football match – The cheering, the shouts of “Michael, Michael, Michael” that filled the stadium, the mass sing-a-long that accompanied the soundtrack of ‘Earth Song,’ and finally, the standing, clapping, stamping and singing accompaniment to the final brace of songs that starts with ‘Can You Feel It?’ and climaxes with the magnificent ‘Black or White.’

Yes – we certainly felt it, Michael, and it’s unlikely any of us will forget it.

With Australia the next country to be visited by Immortal in its around the world odyssey, I was left wondering how seeing the show in my own country could possibly top the Hong Kong experience.

But, regardless of nationality, the fans’ enthusiasm for Michael should never be underestimated – No matter their location on the globe. I should know – I’m proud to be one of ’em.