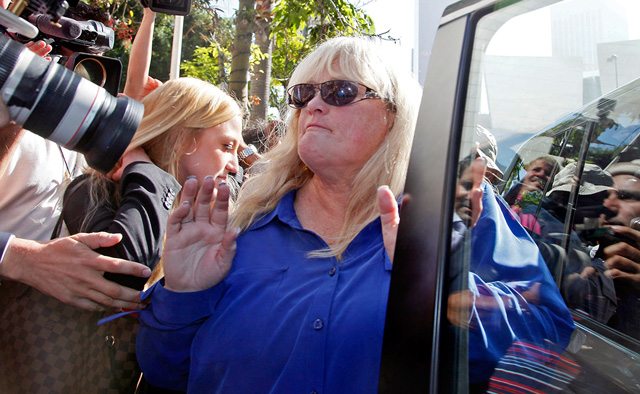 Today, Michael’s ex-wife Debbie Rowe was back on the stand. Mrs Jackson’s attorney Deborah Chang continued with her cross examination.

Chang then showed a picture of black male with vitiligo and Debbie responded with; “The thing with vitiligo, the colour can come and go and if you go in the sun you can get sunburn,” Debbie explained. “For Michael, it came and went for a good period of the time. It was easy to cover with make-up. Everybody said he bleached himself, but he didn’t.
And people still say it! He’s very shy, so for him to have all of these things going on and being in public it was very hard.”

Debbie continued by saying Michael cried about it, was embarrassed and felt disfigured. She explained that he was worried that people would see disfigurement. “He’s very shy,” she said.

Chang asked if there was a comparison to elephant man. She agreed. “He didn’t really trust anyone at all,” she said and she added that he didn’t disclose it to his mother. He wanted her to know that he was okay and that she didn’t have to worry about him.

The testimony continued as follows;
Chang – And he was almost phobic to needles?
Debbie – Oh, he was phobic.
Chang – Sometimes you’d have to literally hold his hand
Debbie – I always did!

Debbie then explained that when Michael was very contemplative and they would go to Forest Lawn (cemetery) over Griffith Park. When asked why, Debbie replied “MJ loves sculpture.”

Debbie explained that Michael had a really good sense of humour and they tried to find humour in things. “Did you always make him laugh?” Chang asked. “Well, that was our relationship. And if he was feeling down I’d do something to take his mind off of it,” Debbie said. “I apparently have no filter, as my daughter says.” Chang asked is she felt Michael appreciated her; “He did,” Debbie replied. “I think he felt refreshed. Because he couldn’t do it, he was happy I could. He knew I’d look after him, I wanted him to see the best physician, would find people who would take care of him.”

Debbie then explained that she had told Michael he needed to be organised with his medication and needed a pill organiser. She said she went with Michael to see other physicians. Dr Metzger was one who is an internist and rheumatologist that treats auto-immune diseases, such as lupus.

“So it takes a dermatologist and rheumatologist to treat discoid lupus?” Chang asked. Debbie agreed.

Debbie said that Dr Metzger was amazing and became Michael’s internist. “And he was the best man in our wedding,” she said. “Based on your observations on the tour, Mr. Jackson wasn’t asking medication to get high?” Chang asked. “No,” Debbie replied. “He didn’t like being high. He was a bit of a control freak. He didn’t like to be high. I was just worried that part of the anaesthesia would kick in. I was told you can’t become addicted
to it.

Dr. Metzger wanted to try Xanax and Michael said that hadn’t work. I said you need to talk to each other and let me know what to do. The shows were all the same, just the girls were different. Uah, that sounds so cheap!” She joked and everyone laughed.

“He was devastated after the divorce from Lisa Marie Presley,” Debbie continued. “I was trying to help. What does make you the happiest? I asked,’ “I want to be a father’ he said.”

Debbie told the court that she told Michael she was pregnant at the airport. “I said you’re going to be a dad,” she said, sobbing. “He was so excited, he ran out in the tarmac screaming.”

Later Debbie explained; “Michael wanted to be a father. I didn’t sign on to be a mom. I loved him very much, and I still do.”

In re-direct, Debbie said Dr Klein treated Michael for acne, lupus, scaring and vitiligo, adding that she wasn’t present at the time when he had Botox because it hadn’t been FDA approved at this time. “Did he use Diprivan for collagen procedure?” Putnam asked. Debbie said he had and it was just Demerol for when collagen was injected around the mouth area. Debbie continued by saying she asked Michael; “Are you here because you really need collagen, or why are you here? I didn’t understand why he would come twice for collagen when he just had it done.” This was in the early 90s and she said se was concerned Michael was coming in for the drugs.

Putnam later asked; “Did you ask Dr Klein if Michael was addicted to Diprivan because of frequency he was using it? Debbie said she had and that Michael had called her while he was in rehab in England. She said she told him she was working, since normal people worked and said that he had to stop everything. He said he was working on it.”