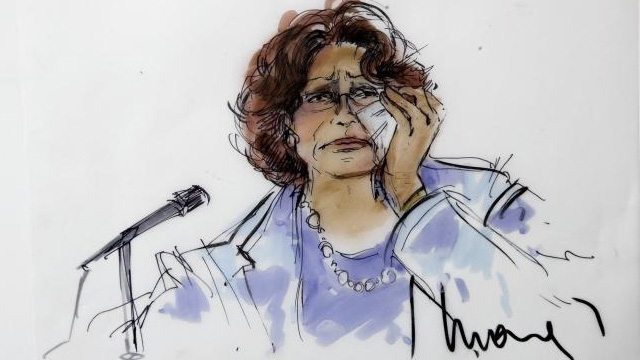 Michael’s mother, Mrs Jackson, testified today that she does not believe Michael had any responsibility for his own death. She was responding to a question from attorney Marvin Putnam, who represents AEG Live LLC.

Mrs Jackson began her testimony on Friday. She tearfully described learning about Michael’s death and told jurors that he had been her primary means of financial support throughout his life. “Michael took care of me, my every need, my every want,” she said Friday. “He gave me everything.”

Putnam told jurors during opening statements in the negligence lawsuit in April, that the case centered on personal responsibility — specifically Michael Jackson’s decision to ask Murray to administer Propofol as a sleep aid while Michael prepared for his shows. Mrs Jackson said she believes AEG Live hired Murray, not Michael. She said she never heard of the cardiologist until her son died and indicated that she felt Murray bore responsibility for her son’s death. “Even though he asked for it, he could have said no,” Mrs Jackson said of Murray.

She said she asked prosecutors to drop a $100 million restitution claim against Murray because he has several children. “His money should go to the children,” she said.

Putnam also asked Mrs Jackson about her son’s payments to her over the years. She said he directly paid many of the expenses on her home and would occasionally give her cash as a gift. Mrs Jackson said she didn’t keep track of the payments and appeared to grow annoyed at the questions.

“What does this have to do with the death of my son,” she asked Putnam.

The attorney also asked Mrs Jackson about conversations she had with her son about prescription drug use. She said she asked him about it when he lived in Las Vegas and he denied he was abusing prescription medications.

“I’m a mother, quite naturally he denied it,” she said. “He wouldn’t want me to think that.”

She said she was aware her son took medications for pain in his back and scalp after he sustained injuries over his career. She said she never saw signs that Michael was abusing medications, including when she and several of her children went to Neverland Ranch for an intervention. She said Michael was fine but upset that she thought he had a problem. Testifying for the second day in her family’s wrongful-death suit against entertainment giant AEG Live, the family matriarch said the conversation occurred as she was getting ready to leave her son’s house in Las Vegas, where Michael lived from 2006 to 2008. She said she told him that she had heard he was using prescription drugs and that she didn’t want him to end up “like all the others.”

Speaking in a soft, muffled voice that was sometimes difficult to hear through the courtroom sound system, Mrs Jackson, when asked a question by AEG Live attorney Marvin Putnam, said her son sometimes didn’t remember things. Several times she told Putnam that she didn’t want to answer a question.

“If a child goes out to play and does something real ugly, and a parent asks them about it, he’s gong to deny it,” she said.

“If you knew your son was gong to deny it, why did you ask him?” Putnam asked

“I’m not answering that question…because to me it doesn’t make sense.” She said. “I didn’t know he was gong to deny it, but he did.”

Eighty-three year-old Mrs Jackson also rebuffed a question about the amount of money she is seeking in damages from AEG Live, saying; “You can talk to my lawyers about that.”

She complained to Putnam that AEG Live executives did not call “an outside doctor” to help her son after show director Kenny Ortega told them he needed urgent help in his last days.

“My son needed another doctor, not Dr. Murray,” she said.

Mrs Jackson then recalled an email written by a top AEG executive referring to Michael as “the freak” just hours before their company signed the his huge concert deal.

“They called him a freak,” she said. “They were making fun of him…’Finally get a chance to meet the freak.’ My son is dead. He’s not here to talk for himself.”

It has been reported that Murray is “following the trial closely” from the jail where he is serving a four-year sentence. His lawyer, Valerie Wass, said Friday. She was in the courtroom to hear Mrs Jackson’s testimony.

She surprised reporters afterward by hinting that Murray may be willing to testify in the trial, despite earlier signing a statement saying he would not since his appeal is still pending.

“It’s been his intention all along to assert his Fifth Amendment privilege, but it’s something we’re re-evaluating on a daily basis, and it’s possible he might want to testify,” Wass said. He might “be willing to testify about certain aspects of the case.”

AEG Live’s defense team told the judge last week they have no intention of calling the doctor as a witness. Mrs Jackson’s lead lawyer said Friday he’s not “sure Conrad Murray is going to add much.”

“I don’t see how he could be incriminated by telling the truth at this point,” Wass said. “We’re considering it. We’re both discussing the issue.”

The latest estimate for the end of this case is now mid-September. The AEG attorney told judge he wants to conclude his case by the end of August.