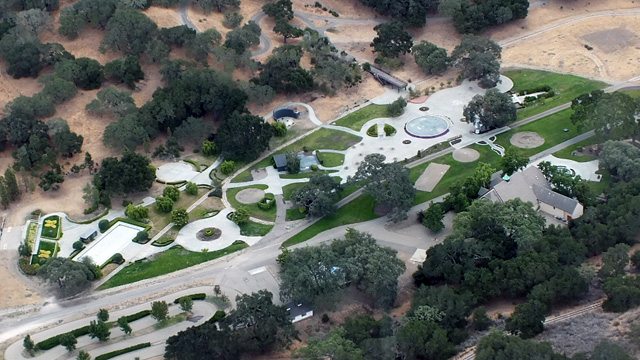 Kerry’s sent us another great article…This time she tells us all about the 3rd helicopter flight over Neverland Valley Ranch.

In June 2013 Channel Islands Helicopters offered Michael Jackson fans the opportunity to indulge in a flight over his fabled Neverland Valley Ranch for the third year in a row. Many of us have seen videos of the flight that some lucky participants have uploaded on YouTube. Now at last I had the opportunity to experience it in person.

Blink and you’d miss the Santa Ynez Airport, I drove straight past it. Just a small sign for glider flights marks the location. This is only a temporary base for the helicopters specifically for the Neverland flights. By 5.00 p.m. on June 24th the crews were packing up their little operation and heading back to Oxnard. (They don’t offer the flights for June 25th because most fans choose to visit Forest Lawn on that day).

The helicopters used for these flights are small, holding just four people each, including the pilot. My companions were from France and Germany respectively and with me being Australian, the passenger list for this particular flight was truly international.

We strapped ourselves in, put on our headphones and prepared to lift off.

Our flight path pretty much followed the road I have driven each time I’ve visited Neverland but only from up here the view is all encompassing, with the folded hills and winding road passing rapidly beneath us.

From my vantage point in the co-pilot’s seat, I soon spotted the familiar turn in to the front gates of the ranch with its stone garden beds and spreading shade trees. But this time the closed gate was no barrier as we flew on up the valley towards the dense irrigated patch of green that surrounds the house and grounds we have seen so often in photographs and in Michael’s home movies.

The lake is the most notable feature at first, then all the trees that surround the main house. As we circle around, the tennis court, garage and swimming pool come into view and finally parts of the house itself, emerging through the trees.

On the hillside opposite is the readily recognisable railway station with its floral clock and on the grassy slope behind it, the white logo of the boy sitting on the crescent moon.

Next came the former amusement park, now bereft of its fairground attractions, but the little race track is still there, off to one side and it’s pretty obvious where the carousel used to be.  I had read reports in the media that extra planting had been down to remove the rather forlorn appearance of this once cheerful place with its rides and visiting children from near and far. Even so, despite the forewarning, it is almost impossible not to feel melancholy about Michael’s former beloved home.

Michael’s music accompanied us on the flight, thanks to the MP3 files loaded on my SmartPhone which was plugged into the helicopter’s sound system. Now as we continued on to the deserted petting zoo, the sad refrain of ‘Childhood’ filled our headphones. I think we all got a little teary.

We flew up and down the valley a number of times, giving all passengers a good look at the ranch regardless of which side of our craft they were seated on. Then we swung out over the hills once again and took a wide arch back towards the little Santa Ynez Airport.

Peter, a fan from Mali who is studying in the US, was at the Santa Ynez Airport awaiting the next flight over the ranch as ours landed. Next day when I drove to Neverland I encountered Peter again. Then, two days later at Forest Lawn, I ran in to Damien, my fellow passenger from France.

In Adelaide, where I come from, we are used to saying what a small place our hometown is. Now I truly believe that, because of Michael’s global appeal and his wonderful legacy, the world is becoming an increasingly smaller place.   Anywhere on the planet where fans gather together to celebrate their love for Michael and do good deeds in his name, is our hometown.

With love and thanks to the guys at Channel Island Helicopters and to all the fans I met through this experience. I trust it was as magical for you as it was for me.