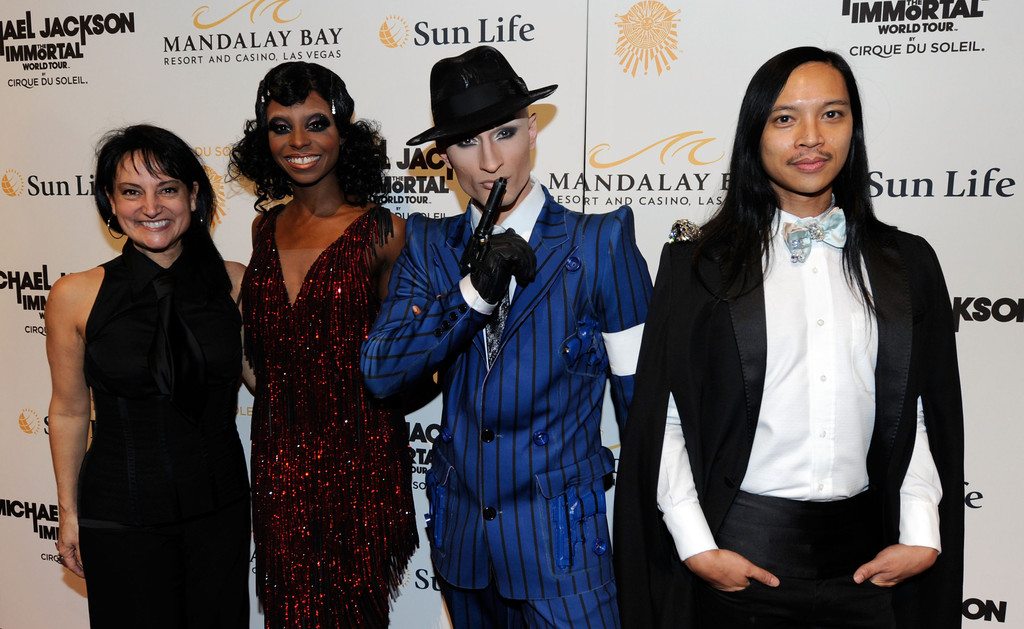 Fashion designer Zaldy Goco first crossed over into music via Gwen Stefani’s L.A.M.B. label, and has since outfitted Britney Spears, Lady Gaga, Jennifer Lopez, Mick Jagger and more for their international arena tours, each with big screens that showcase every stitch.

But one set of costumes never made it to the stage. In 2009, Goco worked with Michael Jackson for his ‘This Is It’ tour — designs riffing off the memorable pieces from Michael’s longtime design team, Michael Bush and Dennis Tompkins.

“I hadn’t gone through anything like that before,” Goco tells The Hollywood Reporter of losing the legend. He joined veteran concert director Jamie King and Michael’s longtime choreographer Travis Payne for Cirque du Soleil’s wildly successful ‘The Immortal World Tour’ in 2010, and now for ‘Michael Jackson ONE,’ an acrobatically ambitious resident production with 26 scenes and 60 performers, which officially premiered on June 29 at Mandalay Bay Theatre in Las Vegas.

“’Immortal’ was an opportunity to complete the project that was left unfinished, in a way, and the new story of ‘ONE’ created different opportunities to pull from Michael’s world and inspiration.”

Though he’s in the middle of relaunching his namesake fashion brand, Goco paused to speak with THR about working with the renown Montreal-trained acrobats, reviving Michael’s “special treasures” and who in music could potentially succeed Michael’s fashion-meets-music legacy.

The Hollywood Reporter: Was it challenging for you to design for acrobats?

Zaldy Goco: In my design world, it wasn’t always just models; I always designed for all different body types for all different types of things. I worked closely with Sarah Sophie Flicker of [New York cabaret collective] Citizens Band. She told me, ‘Nothing on the belly or the lower back.’ But working with Cirque’s varied performers opened up a whole world for me. All of a sudden, you’re dealing with a contortionist with entirely different needs. Everything is so specific, and that was the fun part – we’d try an outfit on and we adapt it by rehearsing until we perfect it, and everything’s okay.

THR: This is your third Michael Jackson-related show. How was your approach different?

Goco: I can’t help but approach it from a fashion point of view, where I want to make clothes that I want to wear or people want to wear. That’s the best compliment I get from people: ‘Oh my god, I want that outfit.’ That’s the appeal I like to build into what most people consider just a stage costume.

But with ‘ONE,’ how do you create something that’s gonna last ten years? That was the challenge, but it goes back to Michael. He created these iconic looks for iconic videos, and when it gets into ‘icon’ stage, it lasts forever. The ‘Thriller’ jacket is the ‘Thriller’ jacket forever — you love it or hate it throughout the years, but it still feels great because it touches on a moment. For example, I presented this idea of a mash-up of the best of MJ’s iconic fashion moments: the epaulets mixed with frogging, mixed with the shape of the ‘Thriller’ jacket and the ‘Dangerous’ belt buckles, but then all in white and silver. It’s honoring what Michael did — which is he always wanted fresh ideas and wanted to get things that are new, and not just keep doing the same thing — but respecting what fans love. You want to please fans, but the big client is Michael. I thought, what would he be into right now, for this show? What do I think Michael would like to see?

THR: Jackson called on multiple designers like Alexander McQueen and John Galliano to potentially design for his ‘This Is It’ tour. How did you feel when you got that job?

Goco: I flew out to meet him within four days of him getting my designs. I found myself in a room with him and Travis [Payne], just sitting on the couch talking. What was great was that he had a lot of ideas and you could talk to him about anything, and we quickly realized our shared love of Swarovski crystal and opulence and everything. I went away, designed more things and sent more swatches over, we’d have fittings and he’d get really excited like a kid. I brought him the light-up ‘Billie Jean’ pants fresh from Phillips Technology in the Netherlands, and I put them on him when we did our last fitting. It was just silence — that weird, uncomfortable silence where you’re like, what is he thinking? Then he said, “It’s everything I always wanted.” He was just so stunned – they did do some LED before, but the technology wasn’t as advanced yet. He just could not stop talking about it — how impressed he was, how much he wanted to push it even further into the future. It was great to see him so excited about a product. It’s always great when you get to work with an artist that’s collaborative and wants to be involved. There are some that are just, “Yeah, it’s great, wonderful.” You’re a superstar, don’t you want to get involved in this even deeper?

THR: Why do you think Michael Jackson had so many major fashion moments throughout his musical career?

Goco: Almost everything he did – that’s the ‘Thriller’ jacket, the ‘Billie Jean’ look, the ‘Dirty Diana’ look, the glove, the sock, the arm brace – everything he did was thought out. It was just fashion for him, and it’s lasting. I don’t think anyone’s really done that before, and still not. Very few people have been able to be an icon that’s created iconic looks that relate to their music. David Bowie has, Madonna did it with the [Jean Paul] Gaultier cone bra, but who else? There aren’t many you can think of. Even though [Lady] Gaga, everything is always, “Wow, look at her,” but it doesn’t have the same “living forever” feel yet. Tons of great looks, legendary, but will we remember that as that look? I’m not sure. Beyonce, does she have a look? Gorgeous, stunning and amazing, but nothing that’s a fashion contribution that you will really, really remember. That’s what’s so special about Michael – it’s music, art, fashion, culture. He entered that world, all at the same time, and everyone responds to it.

THR: What are some of your favorite outfits from Michael Jackson ‘ONE?’

Goco: ‘Thriller’ ghouls — outrageous. When you see them, they’ve got LED guts spilling out of their bodies — completely covered, head-to-toe with no skin showing at all. It’s really scary, frightening! I love them. And the ‘Smooth Criminals,’ the Japanese acrobats — I love those outfits and I love those guys! It’s one of the most exciting numbers. They’re such sharp, energetic perfectionists and the way they can perform in these big coats. At first, I never wanted to do any black light on any outfits, but somehow we came up with this way of doing it in white – normally, you just have all these other neon colours. That was an exciting advancement in that area, and then it goes back into these blue and white striped suits! I love the MJ girls in ‘The Way You Make Me Feel,’ and the white outfits they normally wear turn into Technicolor. A quite simple shift, but the colour was enough to make it feel special.

I also love the Muse – gold, crystals, and big gold boots. I love her outfit because her being the Muse, it’s a technique that I used on a jacket for Michael for ‘This Is It.’ It was supposed to be his finale look for ‘Man In The Mirror.’ It’s a technique that mimics frogging, but almost like frogging walls, stuffed full of Swarovski crystals, packed in there so it’s like two inches thick. I remember when I showed that to Michael, he said, “This is like my secret treasure!” I don’t like to pull too much from the past, but I just thought that since she’s the closest thing to Michael, I’m gonna give her that inspiration from ‘This Is It,’ since we never really got to see it. I love that.