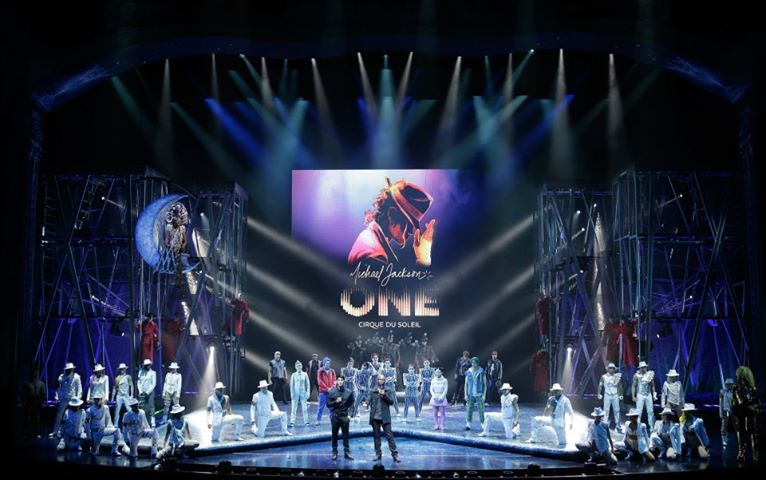 Kerry, from Australia, has sent us another great article about her recent visit to the Mandalay Bay in Las Vegas, where she saw ‘Michael Jackson One.’ Here is Kerry’s article.

In a word AWESOME. Of course, I’m biased. I’m an MJ fanatic as well as a Cirque fan.  I loved ‘IMMORTAL,’ which I’ve seen seven times (in Las Vegas and London) to date, with Hong Kong and Melbourne shows to come.

If you asked me what’s so great about these shows, it’s because no-one is trying to BE Michael Jackson in them no-one is impersonating him (more on the so-called hologram later) but he is certainly present whether projected on the big screens behind the performers, in the music, the dances performed so-energetically by the cast, and the very spirit of the shows themselves.

In ‘MJ ONE,’ a quartet of young fans attempt to avoid the constant harassment of paparazzi to attain those iconic objects that represent Michael the performer to the world his glove, his glittery sox and shoes, his hat and his mirror sunglasses. With these objects the fans obtain super powers capable of dispelling evil i.e. the bullying media.

There is a strong anti-tabloid theme to the show, which must be applauded, given the comments of some audience members (near me) who still unwittingly subscribe to the skin-bleaching and excessive plastic surgery scenarios the tabloids loved to peddle about Michael (and still do as though in total ignorance of all medical evidence!)

But, despite the fact that these tabloid myths continue to dominate and fascinate the general public, they are still flocking to the show and giving it a standing ovation.

This is what is so great about Cirque du Soleil’s collaborations with Michael’s Estate  under the guidance of creator Jamie King, we have Michael’s genius presented in a thoroughly entertaining way to enthral not just the committed fans, but anyone just wanting to see a spectacular show.

‘MJ ONE’ is certainly that with all the acrobatics, and theatrical effects they are known for, all set in tune to Michael’s songs. Watching both MJ Cirque shows you start to appreciate how perfectly suited Michael and Cirque were for this type or ANY type of collaboration.

We have illusions, aerialists, incredible dancers, pyrotechnics and, most dominant of all, the thumping beat of the music, which comes to you directly from the speakers in the seat you’re sitting on. There is no live band in ‘MJ ONE’ the music, whether full length versions of the songs, snippets or mash-ups, is straight from Michael’s albums.

There are almost too many highlights to mention whether it’s ‘Dirty Diana’s’ fabulous pole-dancer, Michael’s moonwalk projected on the big screen, followed by the dancers with lighted costumes performing it on-stage (a further development of the treatment given in ‘Immortal’) or the remarkable ‘Man In The Mirror.’

In the later, an illusion of Michael appears in a golden light, dancing and interacting with the audience. I really don’t care how it’s done it is a wonderful touch, representing the fulfilment of the four fanatics quest to discover the real Michael through his iconic costume props. Contrary to what you may have read in early press reports it is not just for a few brief seconds, either. The image disappears in a puff of pixie dust and reappears again throughout the length of the song.

My only complaint about this is that at the end of the song, with the image of Michael alone on the stage, he turns from the mature performer into the little boy in the cowboy hat from Jackson 5 days.  I really wished they didn’t do that. To me, Michael the man is the star, the little boy, the family breadwinner from such a tender and vulnerable age is the childhood genius that gave birth to the man. But please, leave us the man to remember. (Michael’s childhood career is paid due acknowledgement early in the show I wish they had left it at that.)

But, despite this and a couple of other minor quibbles, I totally love and appreciated ‘MJ ONE’ both times I have seen it to date. Whether sitting back in the centre of the theatre (where you get the best view of everything) or down in the front row (where you can interact with the dancers in the finale) you’ll be on your feet clapping and dancing by the time ‘Black Or White’ builds to a climax.

Waiting for the theatre doors to open

The entrance to the ‘ONE’ theatre

Before the start of ‘ONE’