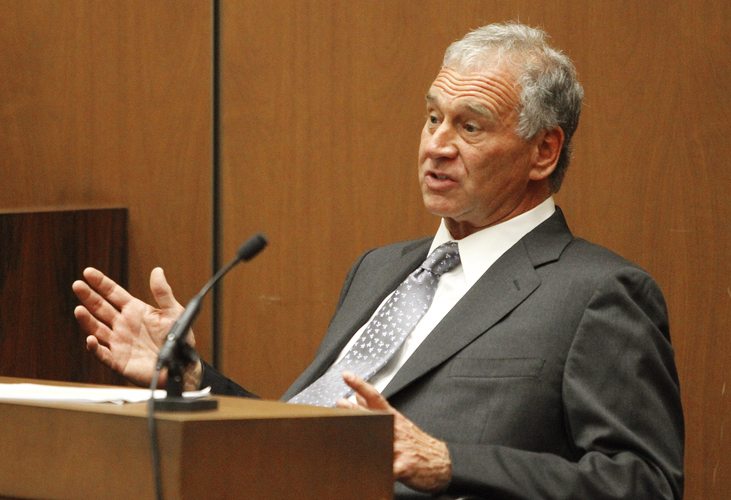 Gongaware was the top producer of Michael’s comeback concerts when he died of an overdose of the surgical anesthetic propofol. It was Gongaware who negotiated the deal to pay Murray $150,000 a month to be Michael’s physician for the ‘This Is It’ tour.

Jackson family lawyers argue that Gongaware should have known the hazards of hiring the doctor because of his personal experience with Michael, and his work with other artists, including on Elvis Presley’s last tour.

AEG Live lawyers contend their executives had no way of knowing that Murray was using propofol to treat Michael’s insomnia because Michael was very good at keeping his “deepest, darkest secret.”

“AEG knew nothing about this decade-long propofol use,” AEG Live lawyer Marvin Putnam said in his opening statements. “They were a concert promoter. How could they know?”

Gongaware, under questioning by his own lawyer Friday, testified that he only became aware that Michael was addicted to painkillers when the singer made a public announcement after his ‘Dangerous’ tour abruptly ended so he could enter rehab in 1993.

He was a manager for the ‘Dangerous’ tour, but only handled logistics and didn’t travel with Michael then, he said.

His job on the second half of the ‘HIStory’ tour, however, carried more responsibilities and he worked closely with Michael, he said.

Gongaware testified that he saw “no indication at all” that he was using drugs during that tour. “I would be certain to notice it if that was the case.”

Did Michael have a doctor treating him during the ‘HIStory tour, his lawyer asked.

“Not that I know of,” he answered.

In fact, Michael was “sensational” on stage, performing 10 to 12 shows a month, he said. Unlike in the ‘Dangerous’ tour, he never cancelled a show because of his health.

“He only missed one,” he said. “That was when Princess Diana died. He heard about the accident, went to bed, woke up, found she passed away and it affected him deeply.”

But an interview that Michael gave to Barbara Walters weeks after Diana’s death could help Jackson lawyers refute Gongaware’s claim that no doctor traveled with the singer during the tour. Walters asked Michael about how he learned the news that his friend, the princess, had died.

“I woke up and my doctor gave me the news, and I fell back down in grief and I started to cry,” Michael said. “That’s why the inner pain, the pain in my stomach and in my chest, so I said ‘I cannot handle this. It’s too much.'”

Michael’s statement that a doctor was at his bedside when he woke up the day of a scheduled ‘HIStory’ show in Belgium is not the only evidence he did have a physician on the tour.

Dr. Neil Ratner, an anesthesiologist from New York, has acknowledged that he travelled with Jackson during part of the tour. He was at Munich, Germany, in July 1997 when a stage collapsed and Michael suffered a back injury. It was two months before Diana’s death.

Dr. Ratner declined to talk about his treatment of Michael when CNN’s Dr. Sanjay Gupta confronted him outside his Woodstock, New York, home in July 2009, although he did confirm that Michael had trouble sleeping.

“It’s really something I don’t want to talk about right now,” he told Dr. Gupta.

A source who was close to Michael Jackson told Gupta in 2009 that when Michael had trouble sleeping that Dr. Ratner helped “take him down” and “bring him back up.”

Ratner, who was convicted of insurance fraud and stripped of his license to practice medicine for three years in 2002, is on the witness list for the trial and has been questioned in a deposition by each side.

Debbie Rowe, Michael’s former wife and the mother of his two oldest children, will testify that she assisted in administering propofol to Michael in the 1990s when she was a nurse, AEG Live’s Putnam said on the opening day of the trial.

“She saw several doctors put Mr. Jackson to sleep in hotel rooms while on tour,” Putnam said, including in Munich, London, Paris.

But Gongaware and others did not know, he said.

“The truth is Mr. Jackson fooled everyone,” Putnam said about his propofol use. “He kept those who might have helped him at a distance and no one knew his deepest, darkest secret.”

Michael’s ability to keep his private side private meant AEG executives could not see any red flags warning of his destruction, Putnam said.

Putnam said Jackson family members, including Janet and her famous siblings, will testify about their failed attempts at intervention and their lack of knowledge about what was happening.

“If they didn’t know what was going on, how could someone else think there was even a problem,” he said.

But Jackson lawyers will argue that Gongaware, who closely watched expenses on the ‘HIStory’ tour because it was losing money at one point, would have noticed spending on hotel rooms and fees for a doctor traveling with the tour.

Gongaware also said he was mistaken when he wrote in an email that his company was paying for Murray.

“We want to remind him that it is AEG, not MJ who is paying his salary,” Gongaware wrote in the email, which was sent after Jackson missed rehearsals. “We want him to understand what is expected of him.”

Gongaware said AEG agreed to advance Murray’s $150,000 a month fee to Michael, but the costs would have come out of the singer’s share of ‘This Is It’ earnings. He said he never instructed Murray about how to care for the singer.

The promoter and producer also told jurors on Monday that he never considered doing a background check on Murray, or anyone such as Faye, who was working directly with Michael.

Murray had several liens and child support judgments and was facing foreclosure before agreeing to work with Michael.

“I just expect doctors to be ethical,” Gongaware said. “Their financial side of their life shouldn’t affect their medical judgment.”

The executive was shown several emails that he was sent less than a month before Michael’s death in which tabloid newspapers were speculating the singer was suffering from cancer.

Gongaware urged his company not to respond. “Our redemption will be when he does his shows,” he wrote about Jackson. “We don’t have to sell tickets, so we can just sit back and prove them wrong by just doing it.”

The trial is entering its sixth week. AEG Live CEO Randy Phillips is expected to testify later this week.