Michael’s Creative Genius Alive In ‘ONE’ 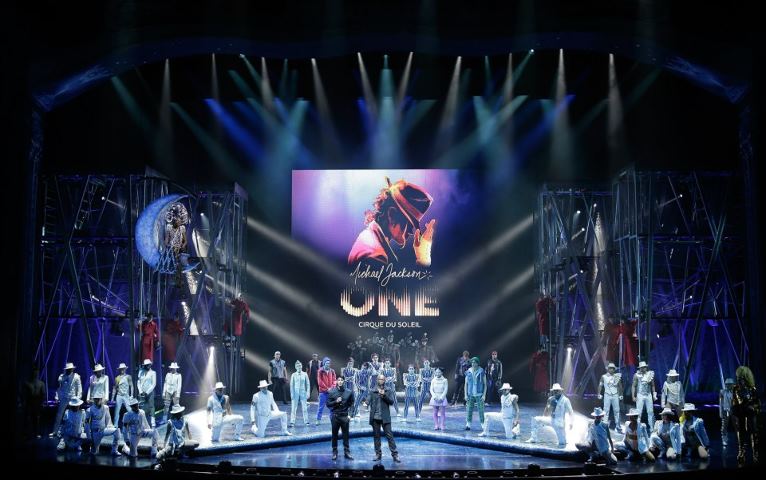 Robin Leach of the Las Vegas Sun, writes about the preview of ‘Michael Jackson ONE’ at Mandalay Bay Resort last Thursday night. He says, “Michael was alive again last night, his genius and musical creativity rekindled to perfection.”

“Die-hard Michael Jackson fans flew in from as far away as Thailand and Japan to attend Thursday night’s first preview performance of Cirque du Soleil’s new ‘Michael Jackson ONE,’ at Mandalay Bay. Tickets, hotel and airfare cost a small fortune, but like me — and I purchased my tickets — they agreed that it was worth every penny, and then some.

The routine using rare, lengthy footage of Michael dancing as a hologram for the Cirque troupe is modern technology at its most brilliant. It’s emotional because it’s so magically real. Michael has become the star of the show he would’ve been thrilled to have watched or taken part. So much so that Michael’s image and creative genius were still alive last night.

‘Michael Jackson ONE’ is a fabulous and incredible spectacular from start to finish. This was just a preview; imagine how Cirque and writer-director Jamie King will make it even bigger and better for the June 29 premiere. But they will! We posted a preview of the show Thursday with links to my interviews with ‘ONE’s’ creative team leading up to last night’s performance.

‘ONE’ is such a riveting and immersive experience, you’ll want to return time and again to catch what you miss. The nonstop action is throughout the theater, up in the ceiling and in the aisles alongside the audience, as well as on the stage and sidewalls.

The dancing is beyond superb. The multi-colored costumes and illuminated wardrobe creations are beyond dazzling. The music compilation of Michael’s No. 1 hits is a seamless audio montage beyond anything experienced before. The video imagery is beyond perfection. Without a shadow of doubt, this is Cirque’s best spectacular in its nearly 30-year history. The pyrotechnics and fireworks onstage add to the explosive show.

The Canadian circus arts company has set itself a new bar of entertainment with a capital E, and now executives and producers will have to revitalize its seven other shows on the Strip to bring them to the astounding levels achieved with “One.” No wonder Cirque founder Guy Laliberte was “bouncing off the walls with joy” last night. “He was the most excited and animated I’ve ever seen him,” one of his partners told me at the private celebration party post-show.

Guy was there only a short time with his President Daniel Lamarre before jetting to the Cannes Film Festival for a One Drop charity event and flying back for the opening of Light Nightclub at Mandalay Bay this weekend, Cirque’s first foray into nightlife. Jamie was cheered and applauded at the party but had to jump a jet to New York, so his was a quick visit, too.

Michael’s estate lawyer John Branca told me: “We are so proud of this show. It could not really be any better, and yet this was our first preview. We’ll still tweak it, tinker with it, but to see and feel the joy, excitement and overwhelming approval from an audience that arrived from all over the world was fantastic. You thought Michael was alive again tonight onstage; I am convinced he was here in some way to watch this extraordinary night. It is beyond a success. It is the very best that could have been done.”

The audience’s unfettered, loud and enthusiastic cheering during the show and at the finale took the roof off the theater. The most memorable moments? There are too many to mention, and I don’t want to spoil your experience. So, brief descriptions of my favorites:

* Contortionist Charles “Lil Buck” Riley almost steals the show with his remarkable body movements. I thought the contortionist at Cirque’s ‘Zumanity’ was remarkable, but this young man in ‘ONE’ amps it up to sheer wonder and disbelief. If you were blown away the first time you saw Michael moonwalking, wait until you see what this guy achieves balanced on one toe. Exceptional.

* The Michael Jackson hologram dance with the cast might well be one of the best theatrical illusions ever created, and Carlos Santana might just have a rival under the same hotel roof with the golden goddess on her guitar.

*For the opening ‘Beat It,’ the four sky-high acrobats on a bungee swing take your breath away as white sequined dancers swing in and out of the scaffolding-like set. The electric, one-wheeled gliders will have everybody calling the Neiman Marcus Christmas catalog for that treasure.

* Cirque and Jamie’s interpretation of “How Does It Feel?” from ‘Stranger in Moscow’ with snowflakes falling in the entire theater is pure joy, reminding of the wonder of the first Christmas with Santa.

* The urban-street breakdances performed on a tiny strip of tape for ‘BAD’ are an eye-popping wonder.

* The Korean acrobatic troupe seem to have miracle powers floating and flying through the air in a steady stream of somersaults that Michael Jordan wished he’d had in his winning NBA days.

* I was moved by the message of hope poignantly written by Michael himself for ‘They Don’t Care About Us,’ with scenes of global violence, the battle against AIDS and the fight with Martin Luther King Jr. for the end of discrimination.

* I loved old video of Michael as Charlie Chaplin for the song ‘Smile’ that led into a mesmerizing tall black female dancer in blue, then partnered with others in luminescent yellow-and-pink outfits and the blow-your-socks off ‘Dangerous’ that followed with more dancers flying in from all over the theater as pyrotechnics and fireworks exploded.

* The ‘Billie Jean’ sequence with the dancers in lighted-up, multicolored suits was so vibrant, I almost missed the acrobats walking up the walls.

* For ‘Thriller,’ the trampoline artists were synchronized better than Olympic swimmers, even performing upside down and falling out of the ceiling. Beware the zombie monsters that ran amok through the theater because one could creep up from behind to scare.

* Shooting stars set up the opening of the Neverland gates and into its magical gardens with an aerial ballet for ‘I Cant Stop Loving You.’ The ‘Man In The Mirror’ hologram dance with Michael could easily have been the show-closer, but Cirque and Jamie still weren’t done with the amazement.

* ‘Can You Feel It?’ was the appropriate way to bring this theatrical stunner to a close as flags of different countries were marched over the Neverland bridge.

Michael was alive again last night, his genius and musical creativity rekindled to perfection. ‘ONE’ is a show that will reign as No. 1 on the Strip for many years to come. There is one word to sum up ‘Michael Jackson ONE’: triumphant!”

Seems like Michael’s fans have a real treat in store!