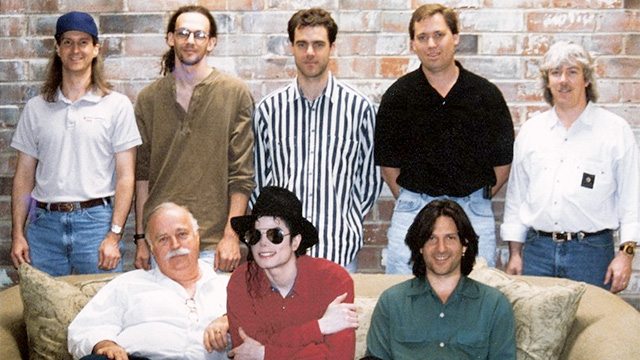 We have come across a remarkable article by Rob Hoffman, Music Producer, from June 2009 about his memories of his own work with Michael, and how Biggie Smalls met Michael for the first time.

I was fortunate enough to work with MJ early in my career. He was an incredible artist. Talented beyond your wildest dreams. Extremely generous, and a hard worker.

He began his career at the Hit Factory in New York, and worked with Bruce Swedien and Michael, who had moved to New York as there had been an earthquake in Los Angeles. After a couple of months they moved back to Los Angeles, where they had two rooms at Record One and two at Larrabee Studios. It was a huge learning curve for Rob, who relished the experience.

He speaks of Michael’s attention to every little detail, and how he knew every note in every chord.

“He would sing us an entire string arrangement, every part. Steve Porcaro once told me he witnessed MJ doing that with the string section in the room. Had it all in his head, harmony and everything. Not just little eight bar loop ideas, he would actually sing the entire arrangement into a micro-cassette recorder complete with stops and fills.

“At one point Michael was angry at one of the producers on the project because he was treating everyone terribly. Rather than create a scene or fire the guy, Michael called him to his office/lounge and one of the security guys threw a pie in his face. No further action was needed . . . . .”

During the recording of ‘Smile’ on ‘HIStory,’ Bruce thought it would be great if Michael would sing live with the orchestra. But of course, we didn’t tell the players that. We set him up in a vocal booth off to the side. They rehearsed a bit without vocals in, then during the first take Michael sang, just about knocked them out of their chairs.

His beat-boxing was without parallel, and his time was ridiculous. His sense of harmony was incredible. Never a bad note, no tuning, even his breathing was perfectly in time.

Once, while we were taking a break, I think we were actually watching the OJ chase on TV, there was a news program talking about him being in Europe with some little boy. I was sitting next to the guy while the news is making this crap up. He just looked at me and said, this is what I have to deal with.

I spent close to 3 years working with him, and not once did I question his morals, or ever believe any of the allegations. I wasn’t even a fan then. I saw him interact with his brothers’ kids, other people’s children, and at one point my own girlfriend’s kids. I got to spend a day at Neverland with them. A completely incredible human being, always looking for a way to make all children’s lives better. Every weekend at Neverland was donated to a different children’s group – children with AIDS, children cancer, etc., and most of the time he wasn’t there.

He was simply living the childhood he never had. In many ways he never grew up.

While they were recoding ‘History,’ Rob recalls.

“I got to spend a couple quiet moments with him during that time. We talked about John Lennon one night as he was gearing up to sing the last vocal of the record – the huge ad libs at the end of ‘Earth Song,’ I told him the story of John singing ‘Twist And Shout,’ while being sick, and though most people think he was screaming for effect, it was actually his voice giving out. He loved it, and then went in to sing his heart out.

Rob has lots of similar anecdotes to tell about Michael, but the story of Biggie Smalls and Michael is heart-warming to say the least, and his meeting with Biggy Smalls is no exception,

“By the way, to elaborate a bit on the Notorious B.I.G. session, it was kinda like this. Michael used to call people to ask them to participate on albums. It was interesting knowing that nearly anyone on the planet would come to the phone if it were Michael calling. Anyway, I heard rumours that B.I.G. was going to come, and I was excited about that! I knew that I would be the one to record that, as I had recorded nearly all of that tune, ‘This Time Around.’

So, Dallas and I were expecting him any minute, and pretty much on time, Notorious strolls in. He was quite an imposing figure when he walked in, as he was quite popular at the time. I had no idea what to expect from him in terms of attitude, but he seemed nice when he walked in. No problem. But almost immediately, he blurted out, “Yo, Dallas, can I meet Mike?” To which, Dallas replied that he thought so. Biggie went on to talk about how much this opportunity meant to him, as Michael was his hero. Anyway, Dallas tells him that we’re going to lay down the rap first, so Biggie heads in the booth, we get some headphone levels and get ready to start recording.

So, we hit the big red button (on a Sony 3348 machine), and away we go. During his first take, Dallas and I looked at each other, because it was spot on. wow. I was impressed, and so was Dallas. We listened back, and Dallas was like, “Wow, I think we got it”. As I recall, we took another take for good measure, but I’m fairly certain that we ended up using the first take. So, Notorious comes in, and asks if he can meet Michael now. We sent word to the back room where Michael was working that Biggie was finished and wanted to meet him.

Simply for security, Michael’s security would enter and make sure that no one was in the room that shouldn’t be, and once that was confirmed (it was just me, Biggie and Dallas), Michael came in. Biggie nearly broke out in tears…I could tell how much this meant to him. Well, Michael could have this effect on anyone, even the most hardcore rappers! Biggie was tripping up on his words, bowing down and telling Michael how much his music had meant to him in his life. Michael was, as always, very humble and kept smiling while Biggie just went on and on how much he loved Michael. I watched Biggie just become this big butterball of a man, and it was really very sweet to witness. After all, we are all just people.

Michael finally asked to hear what we had done, and we popped it up on the big speakers and let her go. Michael LOVED it and was excited to tell Biggie that! “Oh, let’s hear it again,” I recall Michael saying, and we listened again. Michael just loved it…and thanked Biggie for coming all the way from Philadelphia. Biggie asked rather sheepishly whether he could get a photo, and Michael agreed. A shot was taken, we listened again, and Michael thanked Biggie. Michael said goodbye and stepped out, leaving Biggie standing there looking completely stunned. It will always remain a great, great memory.”