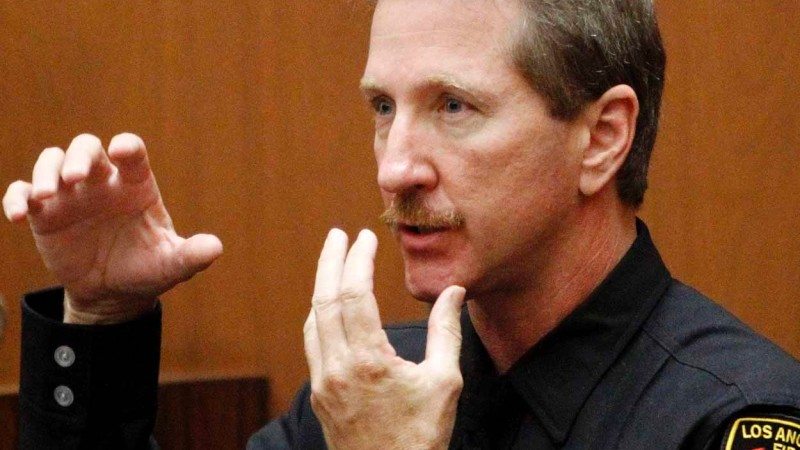 The first witness of the day was Richard Senneff, a paramedic who was first at the scene of Michael’s death. Senneff mostly repeated the testimony he gave as one of the first witnesses in the Murray trial:

“The patient appeared to be chronically ill to me,” Senneff testified, saying he could see Michael’s ribs. “He was very pale and underweight. I thought perhaps this was a hospice patient.” “He looked like someone who was at the end stage of a long disease process.”

“No, no, this just happened,” Murray told him, Senneff said. Michael was not breathing and appeared to be dead, he said. Michael seemed so far gone, Senneff asked if there was a DNR – do not resuscitate – order.

Senneff also described seeing an IV pole and bag by the patient’s bed.

Conrad Murray identified himself to Senneff as Michael Jackson’s “personal physician,” according to the paramedic.

“Even for Bel Air, a personal physician is unusual,” Senneff testified.

The words “personal physician” could play slightly in favor of AEG defense lawyers, who want to show that Murray was under Michael’s control.

“He was pale, he was sweating, he was very busy,” Senneff said of Murray.

Senneff testified that Murray was less than truthful as paramedics struggled to revive Michael with CPR. Murray said he had been treating Michael for dehydration.

“`When did this (cardiac arrest) happen?’” Senneff said he asked. Murray, according to Senneff, replied: “Just now.” But Senneff said Michael had no pulse, his pupils were fully dilated and his eyes were dry. “To us it didn’t make sense that it had just happened,” the paramedic told jurors. “His skin was very cool to the touch.”

Senneff also described how he returned to the upstairs bedroom to retrieve some equipment after they had loaded Michael into the ambulance. That’s where he spotted Murray picking up items putting them into a white plastic bag.

“He looked like a deer in the headlights,” Senneff said.

Murray never told the EMTs that he had administered the powerful anesthetic propofol, and family lawyer Brian Panish is expected to show that the doctor was trying to hide that evidence.

An AEG lawyer asked Senneff during cross-examination if he thought Murray was not telling him the truth.

Senneff’s testimony is important to inform the jury about the circumstances of Michael’s death, but the drama that filled the courtroom during the trial against Conrad Murray, was not duplicated.

Los Angeles Police Detective Orlando Martinez, who initially investigated Michael’s death, is scheduled to be the second witness. He told a court he found a mass of evidence that the pop star’s doctor was in dire financial straits. Orlando Martinez said he believed Conrad Murray would do whatever was necessary to get paid.

The LAPD homicide detective was among the first witnesses in a $40bn (£25bn) civil court battle between Michael’s family and AEG Live, the promoter of his comeback tour.

Mr Martinez told the jury that Murray, who was convicted of Michael’s manslaughter, was more than $500,000 (£321,000) in debt at the time of the star’s death. He said the doctor was financially “severely distressed”.

Murray has eight children by seven different women and faced a mountain of claims for child support, mortgage and tax arrears and loans, the court heard. He was expecting to receive $150,000 a month (£96,000) to serve as Michael’s tour doctor, but Michael died before the contract was signed.

Mr Martinez conducted a police interview with Murray shortly after Michael died in which the doctor said he was employed by the star, and not his promoter.

But Mr Martinez told the court that he discovered a contract in the doctor’s car which showed an arrangement between him and AEG Live.

He will continue to give evidence on Wednesday.