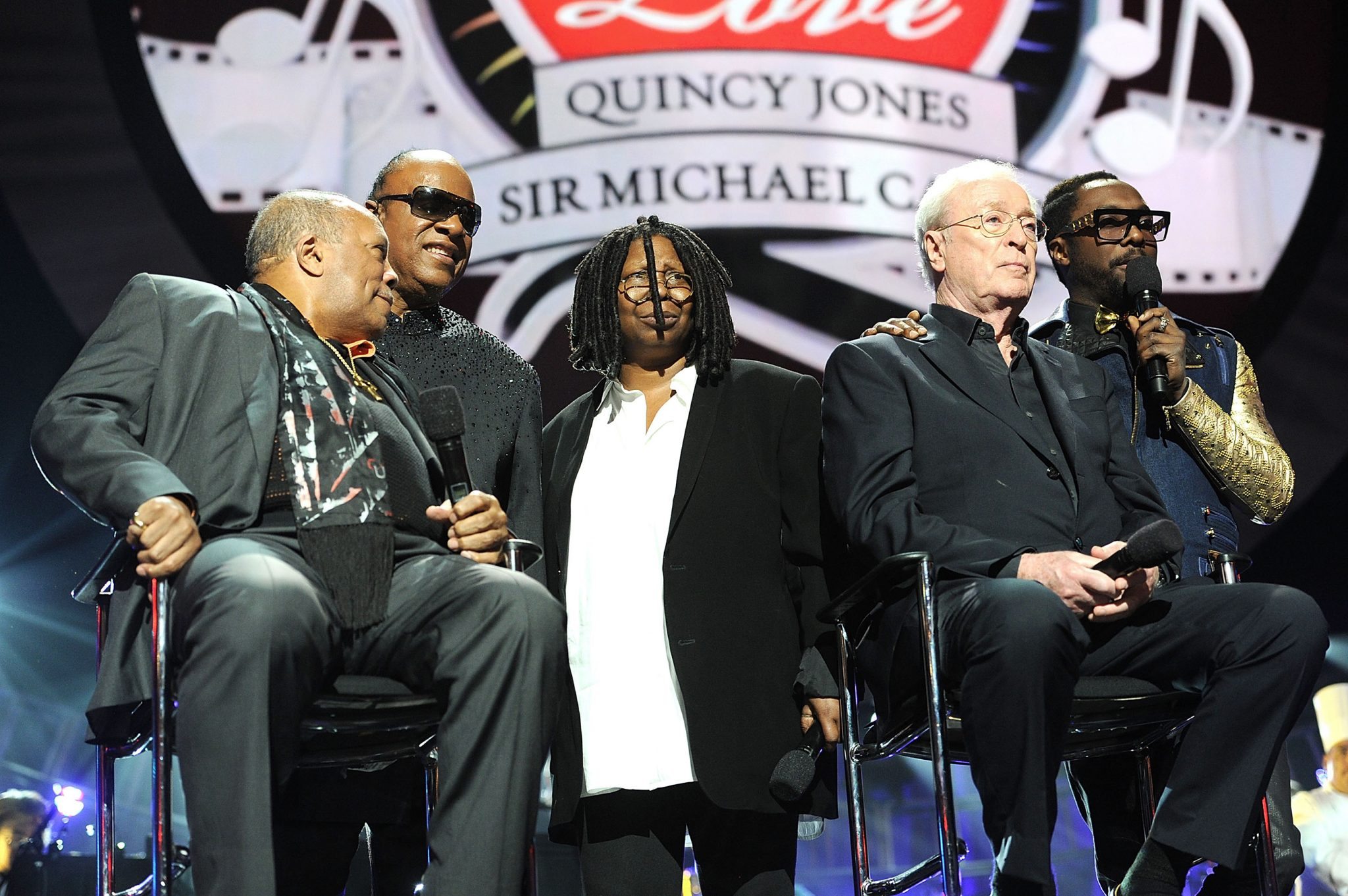 Last Saturday, at the 80th birthday party of Michael Caine and Quincy Jones, Michael was honoured with two renditions of his famous songs ‘Man In The Mirror’ and ‘We Are The World.’ It seems very apt that he was so honoured, when he felt so passionately about the power of LOVE!

Sir Michael Caine was married in Las Vegas 40 years ago at Little Chapel on the Green across the Strip from Circus Circus. Caine and his new bride, Shakira, gazed at the walls and were impressed by all the famous people who had been married at the little chapel. Then Caine cracked, “You know, all of these people are divorced now.”

On Friday afternoon, Caine passed Circus Circus on his way to the Cleveland Clinic Lou Ruvo Center for Brain Health. He looked to the east, and … “The chapel is gone now,” he said, “but the marriage survived.”

Caine is always conscious of the power of love. This is true whether he is celebrating his 40-year marriage to Shakira, his deep friendship with Quincy Jones or the power of love shared by the super-famous artists who appeared at MGM Grand Garden Arena on Saturday night for this year’s Keep Memory Alive ‘Power of Love’ charity gala.

The night honored the twin 80th birthdays of Caine and Jones, who were born within minutes but on different continents (Caine in London, Jones in Chicago) and raised money for the Ruvo Center. It was the 17th such gala, started in 1994 by Cleveland Clinic founder Larry Ruvo at Spago at The Forum Shops at Caesars Palace. Over the years, the money raised for the construction and operation of the Ruvo Center to fight degenerative brain disorders has exceeded $100 million.

The total take from this year’s show has not been announced, but donations are still being accepted by texting MEMORY at 80888. A 2-hour version of the show will be rebroadcast next Saturday on Cox Cable Channel 14 (Vegas TV) at 8 p.m.

The approximately 1,600 guests in attendance paid, at minimum, $1,500 per seat to attend the gala. The baseline for the live take was about $2.4 million, and the total amount raised will be much higher when the final figures are tabulated. In years past, the one-night total has eclipsed $20 million.

As is customary, the Grand Garden Arena was lavishly appointed for one of the year’s biggest events in Vegas. Eight big screens beamed the activity onstage to the audience, and the performers were flanked by two long and winding staircases meeting at either side of the stage. A giant, red-trimmed ‘Power of Love’ logo, showing images of the night’s honorees, hung in the middle.

A dozen globes glowing with strobes were hooked to the ceiling as video highlights of the careers of both men played as guests dined. Vintage footage of The Rat Pack (Jones famously recorded with Frank Sinatra) and classic Michael videos were played as entertainment.

Naturally, clips of Caine’s greatest movies and of Jones working with the superstar lineup for the ‘We Are the World’ recording session, also were beamed to the crowd.

The live performances were a happy mix-and-match of superstars, capped by Stevie Wonder singing ‘Happy Birthday’ to both legends and leading a show-closing ‘We Are the World.’

Amongst the many performances by well-known entertainers, was Chris Tucker singing a credible impression of Michael’s ‘Human Nature.’ Up next was an all-star tribute to Michael led by Snoop Lion (the onetime Snoop Dogg), Jordin Sparks, Jason Derulo and Siedah Garrett. The band, led by Greg Phillinganes (who recorded and toured with Michael, among many superstar artists), then rolled out a medley of Michael’s hits, ‘Man in the Mirror’ being the highlight.

The final star appearance was by Will.I.Am of The Black Eyed Peas, who started in with ‘We Are the World,’ which was performed by an all-star cast!

The Power of Love Gala was produced by headlining sponsor Bill Edwards Presents Inc. in partnership with Las Vegas, official sponsors HARMAN and Playground Sessions, and Keep Memory Alive, the fundraising arm of the Cleveland Clinic Lou Ruvo Center for Brain Health. The birthday celebration for Jones and Caine honored a lifetime of achievement for the entertainment marvels and raised funds for clinical programs, caregiver support and testing of new treatment for neurodegenerative diseases like Alzheimer’s, Huntington’s, ALS, Multiple Sclerosis and Parkinson’s. For more information about Cleveland Clinic’s fight against brain disease.

Keep Memory Alive, whose mission is to provide enhanced treatment and ultimately cures for patients and their families suffering from neurocognitive disorders, raises awareness and funds in support of the Cleveland Clinic Lou Ruvo Center for Brain Health. By supporting Keep Memory Alive and its fight against neurodegenerative diseases such as Alzheimer’s, Huntington’s, Parkinson’s, ALS and memory disorders of all kinds, we can ensure progress towards better treatments and ultimately cures will occur in Las Vegas.  For additional information call (702) 263-9797 or visit here.

Source: Las Vegas Sun & MJWN, with thanks to Paula