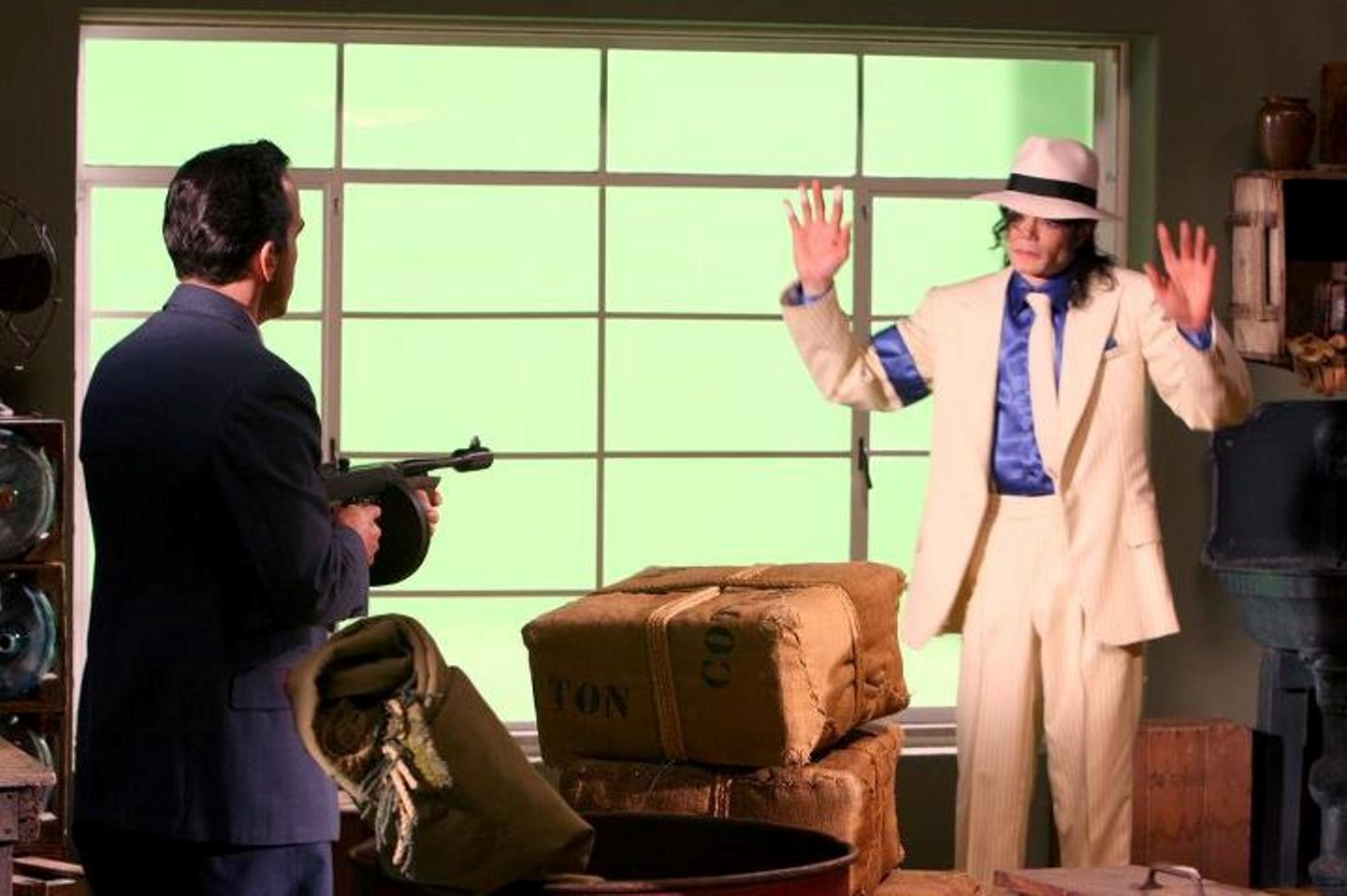 Here is an interview Paula Katsikas recently did with John Tobin who played Bogart in Michael’s ‘This Is It.’

Originally from New York, actor John Tobin began his acting career in Connecticut performing in musical theatre. This then led John to his part in a Humphrey Bogart tribute due to his striking resemblance to Bogart. John has quoted in the past, “My Grandfather looked like Humphrey Bogart, and people started telling me I do to.”

He was later hired for a factory outlet commercial in Boston and not long after, in 2002, he moved to California to further his acting career and to obtain more work as Bogart.

He has numerous film appearances to his credit in movies such as ‘Indiana Jones 4,’ ‘Amistad,’ ‘The Changeling,’

‘Mission Impossible’ and ‘Meet Joe Black’ to name a few, as well as parts in television shows like ‘Desperate Housewives,’ ‘Nip Tuck’ and ‘Law and Order.’ More recently he has appeared in ‘Criminal Minds’ and ‘CSI Las Vegas,’ as well as a part in the blockbuster movie ‘Transformers 3.’ However, what he is best known for within the MJ Community is his role next to Michael as Bogart in the new footage of ‘Smooth Criminal’ for the movie ‘This Is It.’

Three years on, John has kindly agreed to share a little of his experience on the time he got to work with Michael with MJWN and the fans.

He tells of how a friend of his who worked with him on the film, ‘The Changeling’ told him of the part and that he thought that he would be ideal for it. John auditioned for the role with one line from ‘Casablanca’ in front of director Kenny Ortega. It was Bruce Jones, the special effects supervisor on the film that told John that he had the part. John says: ‘I was thrilled and very excited! I couldn’t believe it. It’s one of the best jobs I’ve ever had!’

The next day he had to go to a costume fitting and the shoot took place the following Monday at Culver Studios. John states that the shoot for the ‘Smooth Criminal’ scene lasted fifteen hours, and Michael was present for about thirteen hours of it. Part of the set up for the film was in ‘Old Hollywood’ style of black and white, complete with the pinstripe suits, spats and with gangster guns present as well. It also incorporates footage of the real Humphrey Bogart and Rita Hayworth, very cleverly done and a brilliant concept. When you put John next to this scene, it is hard to tell who’s who at times.

John recalls how shocked he was when he heard the news of Michael’s death. He states; “I was in shock when I heard the news first of Michael’s heart attack. I’ve been a fan of MJ’s since I was a kid and remember listening to ‘Off The Wall’ all the time. Michael had also invited me to the second show at the O2 in London. I knew at that moment that it was not to be…but what a beautiful thing of Michael to do.”

John also shares his experience on his first introduction to Michael saying; “I was introduced to Kenny Ortega first who smiled at me as I was standing there in my Bogart attire, and then he pointed behind him to Michael, Paris, Prince and Blanket, who were all smiling to and watching the scenes on the big monitors. Michael shook my hand for the first time. He was very warm and sweet. We shook hands again while we were at the top of the stairs where the scene starts. Travis Payne walked up first with Michael following behind him. Travis, not realising that we had already met earlier introduced me to Michael, where Michael and me shook hands for the second time and then for the third time as he was leaving with his kids.”

When asked about his time on the set with Michael and what he remembers the most, John states that besides the action when shooting the ‘Smooth Criminal’ scene with Michael, he remembers having three conversations as a fellow actor and Michael stopping by his chair on the night after having shot the scene to say, “thanks and goodnight…”

“He didn’t have to do that you know, but that’s the sort of guy that Michael is,” John added.

On another occasion while on the set and while Michael was standing next to him, John remembers a cute moment where he tells Michael, “The hallway is slippery Michael,” Michael replies, “I know it is John” with Michael’s infectious giggle at the end. John also relays; “After the second take of the ‘Smooth Criminal’ scene we ended up near the kids who applauded us. This made me feel good and more relaxed.”

In between takes John did get some one-on-one time with Michael where they talked about old movies. John says; “Michael asked me how many times had I seen Casablanca’, and I replied “about 75 to 100 times.” Michael then told me that he had watched it about three times at Neverland with a friend and that he loved Humphrey Bogart and what a wonderful man he was…” Michael’s humble and polite manner made a lasting impression on John.

John doesn’t take for granted his good fortune, acknowledging how lucky he was to have met Michael and saying that he was surprised that Michael was even there and didn’t expect it, as other projects like these that he had been a part of were usually filmed without the main star. He added that working with Michael was amazing and that seeing himself next to Michael on the screen, in his own words, “was a pretty cool feeling,” and John also added how very blessed he was!

What an unforgettable experience and a part of John’s career that I know that he will treasure forever. Whatever the future has in store for John, with a portfolio behind him that includes working with Michael Jackson, the smoothest criminal of them all, it has to be many good things. ‘This It It’ would have been the Show Of The Century and John was a part of it.

Thank you John for sharing your story – “Here’s Looking At You Kid!”

If you would like to watch a video of a speech that John Tobin gave in June 2010, please click here.

Source: MJWN, with special thanks to Paula