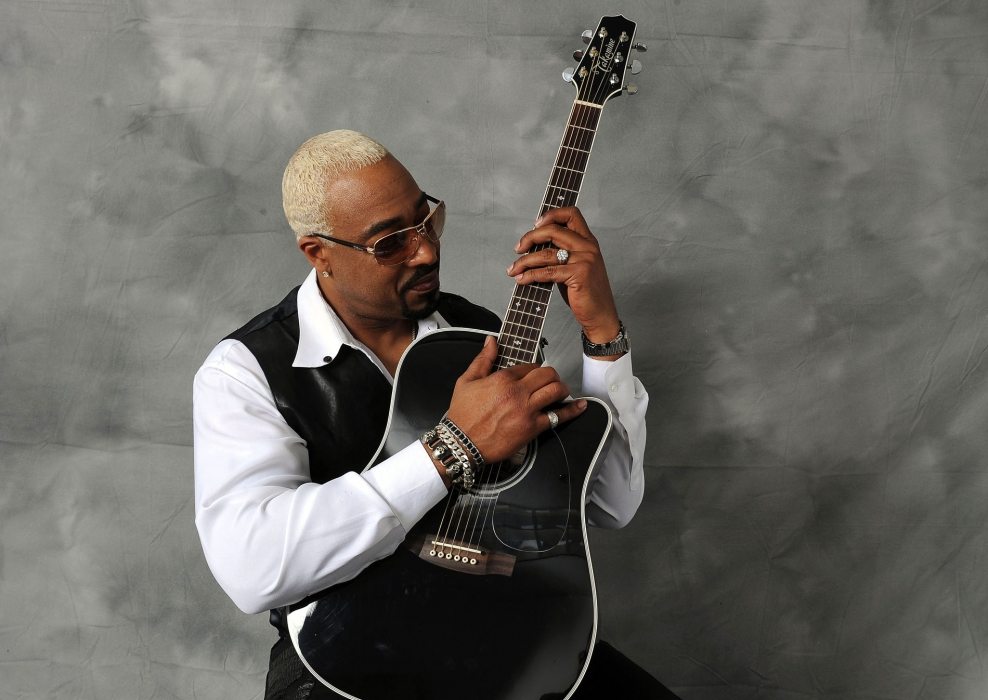 Tommy ‘O,’ one of Michael’s guitarists from ‘This Is It’ has been kind enough to talk to Callum Ross of MJWN about his guitars, his music, and of course Michael!

I have been a keen guitarist now for many years and have worked as a lead guitarist for a few bands, so can you imagine the delight when the team suggested to me that I would get a chance to interview guitar legend Tommy ‘O’ Organ, one of Michael’s guitarists from ‘This Is It.’

Tommy ‘O’ first picked up a guitar at the age of five and plays by ear, not by reading music, which is the way I like to play. He was a guitarist on Janet Jackson’s ‘Rhythm Nation’ tour and has worked with Usher, TLC, Bobby Brown and Slash to name but a few. He also toured as lead guitarist with the Jacksons on their ‘Unity’ tour and has completed numerous studio recordings with artists such as Lionel Ritchie, Jimmy Jam and Terry Lewis, Randy Jackson and the late great Ray Charles so there was plenty to ask about…not forgetting about Michael of course! :-)

Hi Tommy ‘O’! It’s great to have such an accomplished musician willing to speak to us here at MJWN. Thank you!

What was your very first guitar and what was the first song you ever learnt to play?

Tommy ‘O’: My very first guitar was a Gibson Les Paul deluxe and the first song I ever played was ‘Batman!’

I hear that you were inspired by many artists, but I’m curious to know what it was about Angus Young (of AC/DC) that inspired you?

Tommy ‘O’: I like Angus Young’s simplicity in the way he plays and his feel is excellent and his stage presence and performance is very exciting.

What is your favourite song (whether Michael related or not) to play and to listen to?

How did you get the chance to work with Michael on ‘This Is It?’

Tommy ‘O’: Through Michael Bearden. He auditioned me, then he liked my style, the way I played and my stage presence – so I got the gig!

What guitar did you predominantly use for ‘This Is It’ and why?

Tommy ‘O’: I use a specially made guitar by Akai. I used it because it was versatile to all styles of music.

How many guitars were you going to bring over to London for the ‘This Is It’ shows?

Tommy ‘O’: I was going to bring twelve guitars!

Tommy ‘O’: No because if you sounded great he wouldn’t mind whatever you used. I never heard Michael once inquire about any guitars or amps because he had hired the best!

What amplification would you normally use, if you were in the studio for example, and why?

Tommy ‘O’: I use my own personal amps because I like to keep my sound consistent to whatever songs I play on in the studio or live, for that matter.

Did you use any effects for the ‘This Is It’ tour? And if so, which ones?

Did Michael give you plenty of flexibility over the way you played his songs and solo’s or did he ask you to play a certain way?

Tommy ‘O’: Michael was pretty flexible on the way everybody played their parts. He just required that we listen to the CDs of the songs and the parts. And then I could play it my own way. All the solos were pretty free and open.

Were there any problems or funny moments you encountered whilst rehearsing with Michael that you can tell us about?

Tommy ‘O’: Yes, (laughs) there was a big spider that was supposed to move across the stage on the song ‘Thriller’ and he thought he could get into it and ride in it, but it really wasn’t for that. It was a remote controlled spider just for show, so we all laughed and Michael laughed too!

What was favourite moment of working with Michael?

Tommy ‘O’: Every moment of every day was an honor to work with Michael. And fun! He made it fun! He was also loving and caring, all the time.

How many guitars do you own and which is your favourite/s?

Tommy ‘O’: Too many to count, I really don’t know! I rotate giving some away to less fortunate or to my fans and then companies/productions send me more for endorsements etc: My favorite is my signature guitars because, I helped create the look, feel and sound.

What are you currently working on?

Tommy ‘O’: I am currently in the studio completing my solo musical debut which I am really excited about. You can listen to portions of my songs on my website – I know you’ll enjoy them! Also, I’ve been traveling to promote the music so that fans can get to know me and what I would like to express through my music. It’s about my life experiences and I am so grateful for all of the opportunities I’ve been blessed with.

If you could give any tips to guitarists who are just starting out, what would they be?

Tommy ‘O’: Listen to music, all kinds of music, different styles and try to learn the notes, guitar solos from different people. Learn songs and chords the best you can.

It is now five and half years since Michael died…do you feel that he would be proud of his legacy?

And lastly Tommy, what do you want Michael’s fans to know about you and do you have a message for them?

Tommy ‘O’: I want fans to know that I am humbled when they come to the shows, enjoy the music, tweet me, follow me on Facebook, Instagram, or visit the website and show love. I’m truly honored and love meeting and talking to as many people as I can. It’s funny because after shows, security always has to kindly ask my management team to get me out of the venue so that they can close down!

My message to everyone is to keep pursuing their dreams, never give up, success could be just one try away!

For more information on Tommy ‘O’ please use the links above or visit:

Source: Callum Ross on behalf of MJWN with special thanks to Laura Chamberlain