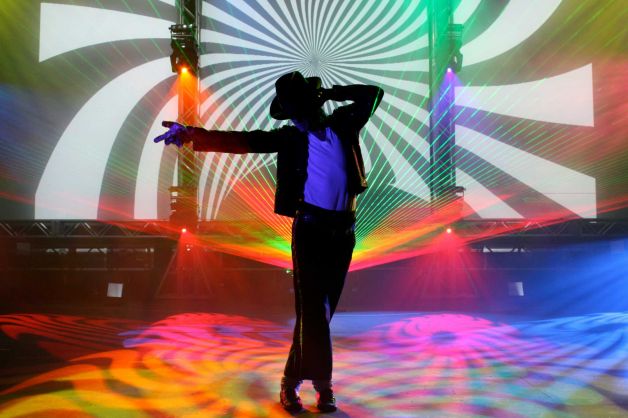 This weekend music fans will be moonwalking on the dark side of the moon.

Well, not exactly, but on Friday, March 21, the Ridgefield Playhouse will host Laser Spectacular’s ‘The Spirit of Michael Jackson,’ followed on Saturday, March 22, by ‘The Music of Pink Floyd.’

The Michael Jackson tribute features a dance troupe performing with a King of Pop impersonator, while fans at the Pink Floyd show will be able to sing along to the band’s classic tunes.

Q: Can you describe what the Michael Jackson show will be like?

A: The show is definitely going to have a lot of dancing. It is a pretty dramatic show. We use a lot of video and a lot of special-effect lighting and lasers. It’s very theatrical, it’s very Vegas-y in presentation and the look, but it’s not corny like Vegas.

Q: What is the Floyd show going to be like?

A: It’s a full-blown rock show. There’s a lot of audience participation. Lights, special effects, video projections and people participate in the same way as at a “Rocky Horror Picture Show” type of event where everybody knows the words and they’re singing along. If you could just imagine a Pink Floyd concert but without the band, that’s exactly what it is. But, you kind of forget that there isn’t a band because the show is so visually stunning.

Q: How much work does putting on this sort of production entail?

A: Oh, God! Months and months and months, and then you continually work on it. As computer animation and computer technology improves, you improve the show. It’s an ongoing process.

Q: Why do you think Michael Jackson has had such a lasting effect?

A: The music is great music. It’s well-written and well-produced and, of course, it’s well-performed. There is the persona of Michael Jackson himself that is part of the music.

A: It’s a very unique experience. It’s fun for the entire family. I mean the kids love it. Everyone really likes the show a lot. It will be something different that people haven’t seen before.

Q: Why do you think tribute shows are becoming more popular?

A: Well, it’s the next best thing to seeing the artists themselves and, of course, you’re not going to see Michael Jackson anymore. Pink Floyd doesn’t tour. Not everyone gets a chance to see these bands, so this is their way of having a similar experience.