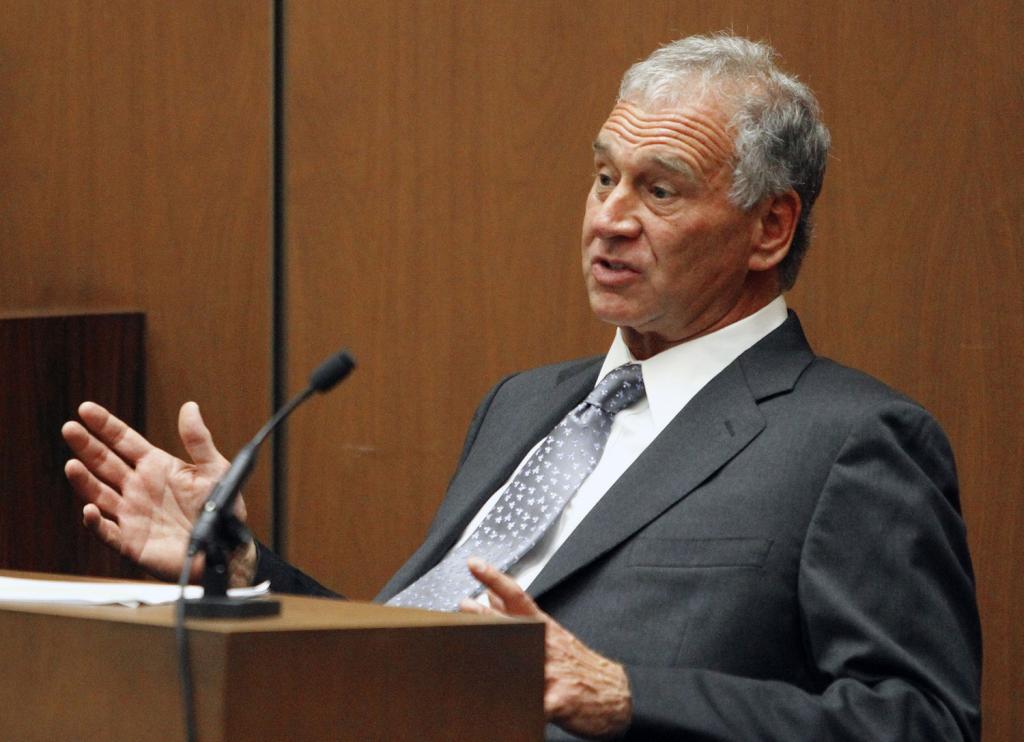 Gongaware, who was one of the top producers of Michael’s comeback concerts, takes the stand as the wrongful death trial enters its fifth week in Los Angeles.

AEG lawyers argue that Michael chose, hired and supervised Murray and that his bad decisions were fueled by a drug addiction their executives had no way of knowing about.

Elvis’s name is expected to come up as Michael’s lawyers question Gongaware about his knowledge of drug use during concert tours. He should have been able to recognize red flags warning about Michael’s drug use because of his experience with Presley, and his time as Michael’s tour manager in the 1990s, they contend.

When Gongaware was managing Michael’s 1993 tour he warned the tour doctor “Don’t be a Dr. Nick” — a reference to Elvis Presley’s last physician — the doctor testified in a deposition.

“Dr. Nick was the doctor whose over-prescription of drugs to Elvis had led to Elvis’ death,” according to a court filing by lawyers for the Jackson family.

Presley collapsed in the bathroom of his Memphis, Tennessee, mansion — Graceland — on August 16, 1977, at the age of 42. While his death was ruled the result of an irregular heartbeat, the autopsy report was sealed amid accusations that abuse of prescription drugs caused the problem.

“Dr. Nick” — Dr. George Nichopoulos — said later he was treating Presley for insomnia. He was charged with over-prescribing drugs to Presley, but he was acquitted. He later lost his medical license in another case.

Michael died on June 25, 2009, at the age of 50. The coroner ruled his death was caused by a fatal combination of sedatives and the surgical anesthetic propofol. Murray told investigators he gave Michael nightly infusions of propofol to treat his insomnia. He was convicted of involuntary manslaughter, sentenced to four years in prison and stripped of his medical license.

The Jackson lawyers are using Gongaware’s Elvis and “Dr. Nick” reference to argue that “AEG knew Michael had suffered chronic substance abuse and drug dependency problems for many years.”

“Shortly after he joined the ‘Dangerous’ tour in 1993, Dr. Finkelstein was asked to treat Michael for pain,” the Jackson filing said, referring to Dr. Stuart Finkelstein, a doctor on the 1993 tour.

After that, Finkelstein told Gongaware “he thought Michael had an opiate dependency problem,” the filing said.

“For three and a half months, the ‘Dangerous’ tour continued,” it said. “Another doctor attended Michael regularly, on one occasion breaking into Dr. Finkelstein’s bag to get opiates to administer to Michael. Gongaware was there the whole time, in charge of tour logistics, aware of the various physicians present, and he discussed with Dr. Finkelstein Michael’s opiate problem.”

When Gongaware warned Dr. Finkelstein, who the brief described as his “close friend,” not to become Jackson’s “Dr. Nick,” he was “warning me, you know, don’t get all infatuated where you start administering meds to a rock star and have the rock star overdose and die on you,” Dr. Finkelstein testified.

Gongaware is also a key witness because he wrote what Jackson’s lawyers call the “smoking gun” e-mail which they argue shows AEG Live executives used Murray’s fear of losing his lucrative job as Michael’s personal physician to pressure him to have Jackson ready for rehearsals despite his fragile health.

Gongaware’s e-mail to show director Kenny Ortega, sent 11 days before Michael’s death, addressed concerns that Murray had kept Michael from a rehearsal the day before: “We want to remind (Murray) that it is AEG, not MJ, who is paying his salary. We want to remind him what is expected of him.” Gongaware, in a video deposition played in court on the first day of the trial, said he could not remember writing the e-mail.

“They put Dr. Murray in a position where if he said Michael can’t go or can’t play, if he said I can’t give you those drugs, then he doesn’t get paid,” Jackson lawyer Brian Panish told jurors in his opening statements.

AEG lawyer Marvin Putnam said in his opening statement that Gongaware and other AEG executives had no way of knowing about Michael’s use of propofol to sleep.

“AEG knew nothing about this decade-long propofol use,” Putnam said. “They were a concert promoter. How could they know?”

Gongaware will also face questions about an e-mail in which he seemed to question Michael’s commitment to his ‘This Is It’ tour.

“We cannot be forced into stopping this, which MJ will try to do because he is lazy and constantly changes his mind to fit his immediate wants,” he wrote to his boss, AEG Live President Randy Phillips.

Michael’s make-up artist Karen Faye testified earlier about an incident in which Gongaware became frustrated because Michael locked himself in a bathroom at his home, refusing to leave for rehearsals at the Forum. Gongaware was “angry and kind of desperate to get Michael to the Forum,” Faye said.

She overheard Gongaware screaming on the phone at Michael’s security guard, telling him “to get him out of the bathroom. Do you have a key? Do whatever it takes.”

“Trouble at the Front’’

Jackson lawyers are also expected to ask Gongaware about e-mails he received that raised questions about Michael’s health in the last weeks of his life.

‘This Is It’ production director John “Bugzee” Houghdahl wrote to him on June 19, 2009 — six days before Michael died — “I have watched him deteriorate in front of my eyes over the last 8 weeks. He was able to do multiple 360 spins back in April. He’d fall on his ass if he tried now.”

Houghdahl’s e-mail, titled “trouble at the Front” was written after Ortega sent Michael home from a rehearsal because of his strange behavior.

“He was a basket case and Kenny was concerned he would embarrass himself on stage, or worse yet — get hurt,” Houghdahl wrote. “The company is rehearsing right now, but the DOUBT is pervasive.”